Having released a video in October in which he said he'd like to punch Donald Trump in the face, actor Robert De Niro has now sounded a far more cautious note about the next American President.

“Are you still going to punch Donald Trump in the face?” Kimmel asked De Niro, “because you could now get arrested for that, I think."

“I can’t do that now he’s president,” the actor replied. “And I have to respect that position … I just have to see what he’s going to do and how he’s going to follow through on certain things. And as we even see now in a lot of cities, there’s a lot of people getting very upset and protesting." 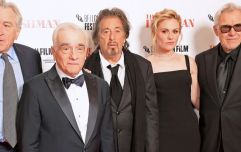 END_OF_DOCUMENT_TOKEN_TO_BE_REPLACED

They also spoke about President Barack Obama's speech from The White House on Wednesday, in which he gave his tentative support to his replacement.

“I’m sure President Obama is speaking from his own personal experience when he didn’t get a lot of support,” Kimmel said, "and he’s saying, ‘Hey, we have to … you know, we’re all on the same team.’ But occasionally teammates do punch each other in the face.”

“Maybe he [Obama] will when he sees him,” De Niro replied.


popular
Take some time to watch the music video for James Blunt's 'Monsters'
LEON to open its second Dublin restaurant in February
The JOE Movie Quiz: Week 38
Barry Keoghan has never looked scarier than he does in Calm With Horses
Heavy snow impacts flight schedule at Knock Airport
QUIZ: Name the missing word from these famous Dumb and Dumber quotes
Chinese student who travelled from Wuhan in isolation in Waterford as precautionary measure
You may also like
2 months ago
Here's one last trailer for The Irishman before it hits Netflix
3 months ago
Martin Scorsese doubles down on claim that Marvel movies are "not cinema"
3 months ago
Bruce Springsteen's story about breaking into Graceland to meet Elvis is brilliant
3 months ago
"F**k 'em" - Robert De Niro blasts critics as he lashes out at Donald Trump
5 months ago
QUIZ: Is this a Robert De Niro film, or an Al Pacino film?
10 months ago
One of the greatest gangster movies of all time is now on Netflix
Next Page