At the end of a perfect day of a patriotic week, the people of Ireland felt like they'd won the lottery when they realised that The Snapper was on telly on St Patrick's night.

The Snapper remains a firm favourite among Irish audiences with quotes from the movie spilling all over the internet from the film's watchers. 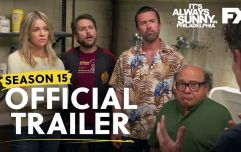 WATCH: Colm Meaney (and a lot of Ireland) feature in the new Always Sunny trailer

END_OF_DOCUMENT_TOKEN_TO_BE_REPLACED

Perhaps the most quotable Irish movie of all time, there's just something in the Curley family that we all seem to relate to.

It also never, ever gets old.

The classic Roddy Doyle tale about young Sharon who gets knocked up by her friend’s Dad after a drunken fumble in a car park involves public shame, making up the daddy’s identity and her family’s reaction – and we get to witness true Dublin humour like nothing else.

A widely adored film every time it graces Irish telly, Twitter blew up with legions of tweets of appreciation, quotes and utter delight in its presence in people's living rooms.

And the crowd went wild...

"The Snapper". My mother would have described it as "very common". But it really is terrific.

The Snapper will never get old!! Love it 💖

Suppose a ride is out of the question #TheSnapper pic.twitter.com/5byNDw5GR5

Meanwhile on @be3Ireland ‘The Snapper’ is on. It counts as research if I watch it again right? @GateTheatreDub #thesnapper

I Went Down on one channel and The Snapper on another. I feel young again.

As if today can’t get more Irish !! Paddy’s day , grand slam winners and now they’ve only gone and put #thesnapper on 😊😊🇮🇪 #A1Sharon

St Patrick's Day, Grand Slam winners and now The Snapper. Life can't get much better than that.

popular
Amazon Prime Video has just added 21 big movies to its library
A nationwide Eir outage has a number of people without broadband
Shock as dead dolphin vandalised with graffiti on Dublin beach
Fianna Fáil denies paying for bots to boost Stephen Donnelly tweet
One of Liam Neeson's best ever performances is among the movies on TV tonight
The six Eurovision countries with "irregular voting patterns" have been revealed
Emirates is looking to hire cabin crew members in Ireland for tax-free jobs
You may also like
1 year ago
WATCH: Colm Meaney stars as Santa as Aldi reveals full version of new Kevin the Carrot Christmas ad
2 years ago
Director of The Raid, Gareth Evans, on his "incredibly violent" brand new gangster show starring Colm Meaney
2 years ago
Gangs of London, the action-packed new gangster series coming to Sky Atlantic this week, looks incredible
2 years ago
The JOE Movie Quiz: Week 48
2 years ago
Colm Meaney and Tommy Tiernan had a gas conversation last night
2 years ago
What is the best Colm Meaney movie?
Next Page