Stan Lee's daughter has weighed in on the subject.

News emerged during the week that that Tom Holland's Spider-Man, a fan-favourite in the Marvel Cinematic Universe, could be leaving the MCU.

Since then, everyone's gone just a little bit mad, with fans posting thousands of tweets and countless petitions being made to "save Spider-Man".

END_OF_DOCUMENT_TOKEN_TO_BE_REPLACED

Sony Pictures also released a statement shedding more light on the situation, which you can read more about here.

But it is Stan Lee's daughter's words that have been the most powerful throughout this saga so far.

In a statement issued to TMZ, Joan Celia Lee made her feelings about the whole thing extremely clear.

She said: "Marvel and Disney seeking total control of my father's creations must be checked and balanced by others who, while still seeking to profit, have genuine respect for Stan Lee and his legacy. 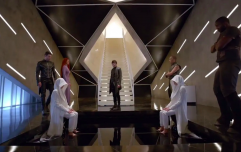 Five years on, we look at the only movie Marvel announced but never actually made

END_OF_DOCUMENT_TOKEN_TO_BE_REPLACED

"Whether it's Sony or someone else's, the continued evolution of Stan's characters and his legacy deserves multiple points of view.

"When my father died, no one from Marvel or Disney reached out to me. From day one, they have commoditized my father’s work and never shown him or his legacy any respect or decency."

She finished her statement by saying: "In the end, no one could have treated my father worse than Marvel and Disney's executives."

popular
Netflix has just added an incredibly tense 97-minute thriller
QUIZ: Name all the counties of Ireland that contain 3 vowels or more
Prime Video has just added 25 very big movies to its library
Irish people could be treated to spectacular sights in the sky over the next few nights
Eamon Ryan's mother dies in tragic accident on family holiday
A great underseen action thriller is among the movies on TV tonight
The Sweatiest Movie Quiz Of All Time
You may also like
2 weeks ago
Marvel has revealed A LOT of new titles coming soon
2 weeks ago
The Russo Brothers reveal which famous Marvel hero would make the best villain
3 weeks ago
Ranking all 36 of the MCU movies and shows from worst to best
1 month ago
REVIEW: Thor Love and Thunder is equal parts fun and blunder
1 month ago
Marvel confirms hints for their new endgame have already been revealed
1 month ago
WATCH: Hawkeye star reveals there have been "conversations" about their return
Next Page