Taron Egerton and Mark Strong on Irish accents, THAT orange jacket and a Kingsman trilogy

Everyone's favourite street-kid-turned-super-spy is returning to the big screen and we can't wait. 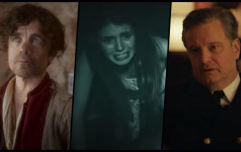 END_OF_DOCUMENT_TOKEN_TO_BE_REPLACED

Following on from his recruitment as a Kingsman in 2014, Taron Egerton has donned his stylish specs once more as the world, yet again, finds itself in dire need of saving.

Coming along for the rip-roaring ride this time around are The Statesmen from the good ol' U S of A, with Channing Tatum, Pedro Pascal and The Dude himself, Jeff Bridges, teaming up with their elite counterparts to try and take down an evil enemy.

To mark the release of Kingsman: The Golden Circle in Irish cinemas, we've sent our own gentleman spy, Paul Moore, to meet the stars of the film.

Paul may not have as many cool suits, gadgets and guns as the brilliant duo of Mark Strong (Merlin) and Taron Egerton (Eggsy), but he still managed to get some top secret information from the pair.

If you're curious to hear how Merlin ended up in the field, what it's like to get your head smashed in, the secret to perfecting an Irish accent and what the guys want to see from a third Kingsman film, then this chat is for you.

Oh yeah, we also got Taron's take on *that* incredibly slick tuxedo jacket.

Get suited and booted, it's time to check out the official trailer for Kingsman: The Golden Circle...

The Big Reviewski || JOE · The Big Reviewski with Andy Serkis, Squid Game follow-ups & the return of Succession
popular
The JOE Friday Pub Quiz: Week 265
Two prisoners who absconded from Loughan House in Cavan arrested by Gardaí
Emergency services rush to high-rise building on fire in Tallaght
Ryanair is seeking applicants for "the worst job in Ireland"
Hollywood couple Joe Manganiello and Sofia Vergara seen enjoying a Cork chipper
QUIZ: Can you master this General Knowledge Quiz?
A modern classic from Quentin Tarantino is among the movies on TV tonight
You may also like
1 month ago
WATCH: The first trailer for Red Notice is here, Netflix's biggest ever movie
1 month ago
WATCH: American trailer for new Irish drama series Kin is epic and action-packed
1 month ago
Three of the biggest theories from that Spider-Man: No Way Home trailer
1 month ago
WATCH: The final trailer for Eternals reveals the huge ramifications from Avengers Endgame
2 months ago
WATCH: First look at cast of new series about Bill Clinton-Monica Lewinsky scandal
2 months ago
Five great new trailers you might have missed this week
Next Page