It's released this week and Oasis fans will love it.

"Obviously me and our kid don't have a relationship anymore, but, who's to say if we'd been a pair of fish mongers we would've still slapped each other with a bit of trout every now and again. I guess it's like a fight - we were kind of, fuckin' like, a Mike Tyson band, you know what I mean? Just come in fucking blazing, knocking everyone out. We were never gonna do ten rounds, and it was never gonna get to points. At the end of the day, I weigh it up and I go 'right, do the good times out-weigh the bad times? Fucking 100%'. I'm happy with that." - Liam Gallagher in Supersonic.

As the credits rolled on the wonderful documentary Supersonic, 'The Masterplan' was belted out and Oasis fans didn't look back in anger at what happened when the band broke up, but rather, they accepted what was.

WATCH: Army Of The Dead gives us smarter, faster zombies (and also a zombie tiger)

END_OF_DOCUMENT_TOKEN_TO_BE_REPLACED

It's likely that the meteoric rise of Oasis will never be replicated and despite the fact that the Gallagher brothers still haven't talked to each other in over a decade, the demand for a reunion is stronger than ever.

There's just one problem though.

Right now, Liam and Noel have never been further apart, personally and professionally.

After the massive success of Supersonic, director Mat Whitecross hinted that a sequel could be made but ask yourself this, what would any new documentary about Oasis be about?

Perhaps the pomp, grandiose, and cocaine-soaked recording of Be Here Now would make for a good watch? After all, the making of that album is almost as overblown as the video for 'D'You Know What I Mean?'

Still though, where's the drama?

How about a documentary on the years when Oasis made Heathen Chemistry, Don't Believe the Truth, and Standing on the Shoulder of Giants?

END_OF_DOCUMENT_TOKEN_TO_BE_REPLACED

Honestly, the only place to continue the on-screen story of Oasis was with their demise and Liam Gallagher: As It Was does exactly that.

Oasis should have been playing on the main stage at Rock En Seine in Paris. Instead, we're treated to stories about how guitars are being smashed and the band is collapsing.

Moments later, Paul Gallagher (Liam and Noel's brother) and Bonehead (guitarist in Oasis) are telling us that the fight in Paris was tame in comparison to some of the other ones that the brothers have had over the years. 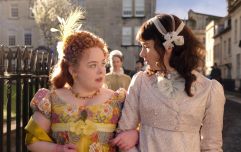 Netflix confirms Bridgerton Seasons 3 and 4 are on the way

END_OF_DOCUMENT_TOKEN_TO_BE_REPLACED

After the split, Liam joined Beady Eye and things didn't quite work out the way he hoped. If Supersonic charted the rise and rise of Oasis, Liam Gallagher: As It Was charts the fall and rise of Liam.

Ever since the release of Definitely Maybe, we've been accustomed to seeing Liam present himself as a beacon of bravado, the embodiment of Mancunian swagger, and a self-appointed god whenever he's on stage.

But what happens when the singer loses his audience?

What the new documentary does really well is display those rare moments when we see Liam's vulnerability and anxiety come to the fore.

Mourning the breakup of two bands, anxious about his future, and enduring a painful divorce, we see Liam at his lowest point and yet, he's still the best company to be around because his ability to tell a story is incredible.

That's why people - both older and younger generations - still flock to him.

Thankfully, the documentary isn't particularly interested in hero worship and Liam even admits himself that a lot of his problems are self-inflicted. He accepts that at times, he has been a shit husband and a forgetful dad.

However, there's a warmth and mischievous charm to the singer that's impossible to ignore and it really shines through in the scenes with his family.

As most music documentaries do, the cameras follows Liam as he embarks on a global tour and we get access to all aspects of his life.

Even during the bleaker moments, he's still terrific company to be around and you can see just how much his manager/partner, Debbie Gwyther, means to him.

Just like in Supersonic, Liam and Noel's mother, the saintlike Peggy Gallagher from Mayo, also makes an appearance and those scenes are a joy to behold.

It's in the small moments -  like when he goes home to the family house in Burnage with his two sons, Lennon and Gene - where you see a completely different side to the rock 'n roll star.

In terms of his personal life, Liam's contrition feels real and the same can be said for his music career.

A fateful trip to Mayo sets him off on the road to redemption and as he takes his first steps into the studio to record his solo album, the swagger is still there but there's also a sense that he's hungrier, more open to suggestion, and dare we say it, mature.

Then again, as Liam says, he used to do eight grams of coke before going on stage, now he only does two. That's his idea of personal growth.

This is very much Liam's story and yet, Noel is still a massive part of it.

However, if you're expecting something that's exactly like Supersonic, forget it because there are no Oasis songs in the documentary and Noel doesn't feature - more on that here.

This being said, it's to the credit of the filmmakers that the documentary isn't any less enjoyable, informative, or engaging without Noel.

We're not going to give too much away but the final 15 minutes really does delve into their rivalry and while Oasis "were never gonna do ten rounds," it's clear that there's still plenty of fight left in Liam.

As You Were x.