"This is the only thing I can think of that is close to justice."

Colin Farrell is a bit of a weirdo.

Actually, let us rephrase that.

END_OF_DOCUMENT_TOKEN_TO_BE_REPLACED

Colin Farrell is at his best when he is a bit of a weirdo.

After Hollywood tried to box him into "Blockbuster Hunk" a few years back - think of S.W.A.T., The Recruit, that shoddy Total Recall remake, Miami Vice - he finally found his calling playing someone who was, well, a bit of a weirdo.

In Bruges, Horrible Bosses, Fright Night and Seven Psychopaths were all Farrell at his very best, and culminated with his unique performance in The Lobster. Giving what many believed the best work of his career to date, he reunited with that movies writer/director, and unfortunately for us, Sacred Deer made about four times less than The Lobster did at the box office.

Which is real shame, because Sacred Deer is about ten times better than that movie, while also being so divisive it could just as easily end up on as many people's Worst Of 2017 movie lists... 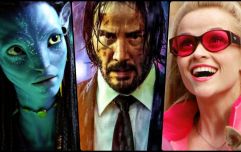 END_OF_DOCUMENT_TOKEN_TO_BE_REPLACED

The problem, and the outstanding highlight, of The Killing Of A Sacred Deer is that there is no correct reaction to watching it. Your emotions will burst out of you, unchecked, as you laugh at the most horrid situations, and cover your mouth with your hand in horror when the film is actually trying to be funny...

Farrell plays the tortured husband (to Nicole Kidman) and father (to two brilliant up-and-comers), who finds himself at the tail-end of Barry Keoghan's psychological warfare on him and his family. Quite why Keoghan is taking aim is barely the plot of the movie, instead we're focused on Farrell's reaction to the plights against him and his family, and the photo-finish between his selflessness to keep his wife and kids alive, and the selfishness of being blamed for any of it.

It is a horror film in every way, except it is also the darkest of dark comedies you have EVER seen. Farrell, Kidman and Keoghan deliver a trio of blindingly brilliant performances, all ever-so-slightly not reacting to the world the way normal people do, acting out on a level of reality that is like ours, but not quite ours, causing us to be constantly on the back-foot when it comes to trying to guess where they will take the plot next.

If you're looking for something completely fucked up and out of your comfort zone... well, there will be another entry even more uncomfortably fucked up than this on the list to come... but this is a good place to start.

We go into more detail as to why the movie is such a tough watch right here.

popular
Meet the Irish man who’s selling all of his stuff and going to live in a tiny house on wheels
QUIZ: Is your General Knowledge up to scratch?
The JOE Music Quiz: Week 57
The JOE Movie Quiz: Week 102
The JOE Friday Pub Quiz: Week 243
Israeli airstrikes kill 26 people in Gaza in deadliest single attack of latest violence
QUIZ: Can you identify which of these countries have the colour white in their flag?
You may also like
1 month ago
Fast & Furious 9 director talks set pieces too big and too crazy for the franchise
1 month ago
The cast and director of Fast & Furious 9 discuss setting a sequel in Ireland
1 month ago
WATCH: The new Fast & Furious 9 trailer finally takes us into space
1 month ago
Dublin drive-in cinema re-opening this month with stellar selection of movies
1 month ago
Record-breaking trailer views indicate massive hunger for return to cinemas
1 month ago
The first Ghostbusters: Afterlife clip features Paul Rudd and some mini-Stay Puft men
Next Page