Best of all, it is available to watch right now.

We're always looking for great new shows, but we don't want to invest any time into a new binge-watching project, only to discover two-thirds of the way through that we're watching something truly terrible.

This week we've already seen both ends of that spectrum, with brilliant true-life crime drama Unbelievable already becoming a hot topic of conversation, while mystery thriller The I-Land may well wind up being one of the worst shows of the year. 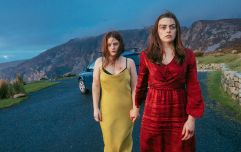 END_OF_DOCUMENT_TOKEN_TO_BE_REPLACED

Already the quality pendulum is swinging back the other way, as the first reviews of Undone literally don't sound like they could be any more positive.

The official synopsis for the show tells us that it deals with "the elastic nature of reality through its central character, Alma (Rosa Salazar - Alita: Battle Angel). After getting into a near fatal car accident, Alma discovers she has a new relationship with time and uses this ability to find out the truth about the death of her father (Bob Odenkirk - Better Call Saul)."

The new series was created by Raphael Bob-Waksberg and Kate Purdy, the same geniuses behind the much-loved BoJack Horseman, but they've gone in a whole new direction here, which can be only be described as rotoscope-animated comedy-drama psychological-thriller.

But even though that all sounds like A LOT, don't let that put you off the show, as the critics will tell you:

END_OF_DOCUMENT_TOKEN_TO_BE_REPLACED

"Transfixing and lushly beautiful. Undone has humor and story enough to make it more than an art object. It is magnificent art, a world opulently realized from its oil-painted backgrounds to its sound design. You don't watch this show so much as fall into it. There's no place like Undone." - The New York Times

"Undone fully integrates its genre elements and its hot topics - science vs. religion, biracial identity, contemporary sociopolitical malaise - into the story's structure. Undone embraces a form of speculative storytelling that's closer to mythology. Its rotoscoped world might be merely a fun-house mirror of reality, but if you're brave enough to gaze into it, a mind-expanding adventure awaits." - Time

"Even when watching Undone is a deeply unnerving experience, it usually finds a way to twist its narrative, let its actors lean into their characters' flaws, and reap unexpected rewards from often shattering revelations. There's certainly no other show like it, which at this point is truly no small feat." - Variety

"To call Amazon's Undone a breathtaking piece of animation would be both to speak truly and to undervalue its strengths. To call it a complex, rich psychodramedy would be accurate and far from the complete picture. It is both, a perfect marriage of story and style, each half invaluable and impossible to divorce from the other. Grounded. Fantastical. A series worthy of deep examination, but which can be most accurately summed up in two words: Watch it." - Roger Ebert

All eight episodes of Undone are available to watch on Amazon Prime Video right now.