The filming will take place between 9am and 5pm on Friday, 9 August. The shoot will take place at the SBG gym in Tallaght - a brand made famous by UFC fighter Conor McGregor, who is a member.

The show is created by Mark O'Connor, the man behind the popular Irish crime film Cardboard Gangster, starring John Connors. 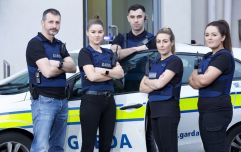 END_OF_DOCUMENT_TOKEN_TO_BE_REPLACED

"It's a gritty drama series set in Bray Co Wicklow in the modern day about a young aspiring MMA fighter stuck between his career supporting his family and the seedy world of gangland crime," according to the extras department for the show. "It's about family, friends, gangs, drugs, love, violence and the MMA fight community."

They're looking for as many people as possible to come out and be in the crowd for a fight scene. People of all ages are welcome.

The application for can be found here.

Unfortunately it's unpaid, but hey, who doesn't love to see themselves on TV? Extras will get food and refreshments, as well as free Darklands t-shirt.

The Big Reviewski || JOE · TBR Spotlight: Loki - Episode Two - 'The Variant'
popular
The Queen appealing for volunteers to weed the garden of her Sandringham Estate
QUIZ: Can you name all these European countries from a list of cities?
Gardaí have said people can't drink alcohol in newly set up outdoor seating in front of bars
Aer Lingus introduce new fee to bring carry-on bags onboard flights
QUIZ: Can you get full marks in this potentially very frustrating general knowledge quiz?
The JOE Movie Quiz: Week 107
Unvaccinated people will be able to travel abroad this summer with Covid cert, says Leo Varadkar
You may also like
3 weeks ago
Virgin Media to deliver "free superfast" public Wi-Fi in over 30 Dublin locations
1 month ago
Eir announces 79 towns and villages now have access to faster broadband
1 year ago
Virgin Media working "flat out" to fix broadband issue for customers
1 year ago
A sneak peek at this week's episode of The Guards: Inside The K
1 year ago
The moment a Dublin woman proposed to her boyfriend on live TV yesterday
1 year ago
Ivan Yates' rabid hosting may well have ruined Ireland's final seven-way debate
Next Page