Who Wants To Be A Millionaire? reboot has landed a very surprising new host

He is one of the last people we would have guessed to take over.

Jeremy Clarkson is reportedly being lined up to replace Chris Tarrant as the host of a reboot of Who Wants To Be A Millionaire?

According to the Sun on Sunday, the 57-year-old will play the role of telling contestants 'we don't want give you that, in a new incarnation classic game show,

The show is rumoured to be setup by the same company responsible for the relaunch Blind Date with Paul O'Grady.  The original version of the show, which had Chris Tarrant in the presenter's seat, ran from 1998 to 2014. 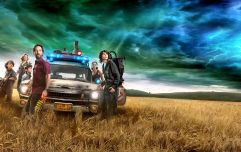 END_OF_DOCUMENT_TOKEN_TO_BE_REPLACED

A source told the paper: "Jeremy is a huge character and the bosses are convinced he is going to come in and really make the show his own.

"As well as interviewing contestants and giving answers, he'll be injecting plenty of humour.

"The show was a huge hit last time around and the hope is that it'll live up to that success the second time around."

It follows rumours last year that he would take up the role.

popular
First photos emerge of Boris Johnson drinking at Downing Street party during lockdown
RTÉ's new show is looking for the best takeaway in all of Ireland
EXCLUSIVE: Ewan McGregor and Hayden Christensen on reuniting on the set of Obi-Wan Kenobi
Ryanair steward arrested after being caught on camera drinking during flight
One of 2022's funniest movies has just been added to Netflix
Kurt Zouma charged with three animal welfare offences
You may also like
1 day ago
QUIZ: If you get 15/15 in this General Knowledge quiz, give yourself a pat on the back
2 days ago
QUIZ: Can you name every county in Ireland containing the letter 'O'?
2 days ago
The JOE Music Quiz: Week 105
2 days ago
QUIZ: Get ready for a tricky time with this General Knowledge Quiz
2 days ago
QUIZ: Can you name whether all these Irish towns are west or east of the River Shannon?
3 days ago
The JOE Friday Pub Quiz: Week 295
Next Page