WATCH: Marvel release short film from Spider-Man: Into the Spider-Verse

Into the Spider-Verse was great, wasn't it? 2018 was definitely the year of the superhero movie, and the animated Spider-Man movie might well have been the best of them all.

The story was brilliant, the voice acting was great, there was twists and turns throughout, and the soundtrack is a 10/10. 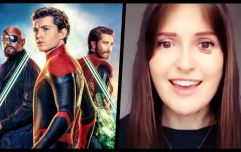 END_OF_DOCUMENT_TOKEN_TO_BE_REPLACED

Spider-Man was everywhere at the time, as a result of the success of the MCU, so this animated adaptation had some real competition, but it absolutely smashed it out of the park.

It even won both an Oscar and a Golden Globe for best animated movie!

And if you can't get enough of the movie, you're in luck, because Marvel have just released a short film from the universe of Into the Spider-Verse.

Starring John Mulaney's (Big Mouth) Peter Porker character, Caught in a Ham is a short film that was originally only on the movie's bonus features, but has now been officially released on YouTube.

No release date for the sequel has been announced, but we want it SOON.

The Big Reviewski || JOE · The Big Reviewski with Ray Liotta, Goodfellas facts & Tom Hanks making us cry
popular
Netflix has just added arguably the very worst movie of the last decade
Four major employers join forces to create Ireland’s first remote working alliance
Up to 90% of petrol stations in the UK have run dry
Here’s what graduates from Irish colleges can expect to earn in the workplace
Plans for new bank holiday now at an "advanced stage"
The most and least expensive places to live in Ireland have been revealed
The JOE Movie Quiz: Week 121
You may also like
1 month ago
Three of the biggest theories from that Spider-Man: No Way Home trailer
1 month ago
WATCH: Peter Parker seeks Doctor Strange's help in first trailer for Spider-Man No Way Home
2 months ago
The three Marvel movies that the final episode of Loki directly sets up
7 months ago
Spider-Man 3 official title and release date revealed
11 months ago
QUIZ: Identify these movies from the 2000s from a single image
11 months ago
It looks like Tobey Maguire and Andrew Garfield will both be in the new Spider-Man movie
Next Page