The ultimate concert film for fans of The Boss.

Springsteen's 19th album might not seem like the most obvious in-point to decide to take up co-directing a documentary about the album itself, but that is exactly what he has decided to do for Western Stars, an album that he has already informed the masses he won't be taking on tour.

Part of that reason must obviously be the 30-piece orchestra that he'd need to bring with him around the world, who accompany him here for the live-recording of the album, track-by-track, filmed in a 100-year-old barn on Springsteen's property. 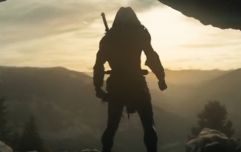 REVIEW: Thanks to a low bar, Prey is the best Predator movie since the original

END_OF_DOCUMENT_TOKEN_TO_BE_REPLACED

He tells us that this barn is often used for his mythic-levels parties, and that the building is filled with history and meaning for him, and he and co-director Thom Zimny (who previously directed Springsteen On Broadway), do a fantastic job of setting the mood: during the performance, it is low-light, low-tables, and just Springsteen, his wife Patti Scalfia, and the orchestra on stage.

Interspersed between the songs are short vignettes, scored by Springsteen, in which he goes into the overarching theme of the Western Stars album, as well as specific talking points on each of the songs as the arrive in order.

These short films are, at times, both the best and worst parts of the documentary. Sometimes he is bracingly honest with his audience, admitting that he often "hurt the people that he loved the most" just to make sure they left him alone before he got too vulnerable around them. But there is a repetition of being caught up in regret of mistakes made over the years, and stylistically, they can come across like Levi's ad trying to make a fridge-magnet-life-lesson.

It is when he focuses more on the songs themselves that Western Stars really lights up. 'Drive Fast (The Stuntman)' sounds like it really should have played over the end credits of Once Upon A Time In Hollywood, the orchestration of 'Hitch Hikin'' give it a much more cinematic sound than what we get from the album version, and Scalfia joins in on the vocals for 'Stones' to heartbreaking effect. 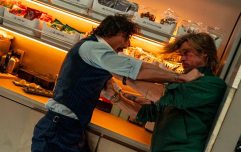 END_OF_DOCUMENT_TOKEN_TO_BE_REPLACED

Springsteen hasn't so much written a love letter for his fans here, as let them in on a Dear John letter to who he was, making his peace with his younger self and all the missteps taken over the decades, and embracing the fact that he loves his wife, loves his life, loves his friends and family, but sometimes a man just needs to get in a car, on his own, and drive away from it for a bit.

Fans of Bruce will love his honesty and unique performance setting, as he gives us all a good look behind the curtain, but those not currently converted to his fanbase will still find more to enjoy here than just an expensive way of doing album liner notes.

Western Stars is showing for one night only in Irish cinemas on Monday 28 October. Check your local listings, or right here for tickets.

popular
QUIZ: Can you name all the counties in Ireland without the letter 'E'?
WhatsApp introduces way to choose who can and can't see you're online
Nearly 100 flights delayed at Dublin Airport on Monday
QUIZ: Can you get top marks in this short but tricky Irish geography quiz?
RTÉ tries to solve Michael Collins murder in new documentary
Netflix has just added an incredibly tense 97-minute thriller
QUIZ: Can you name all the counties in Ireland with an ‘N’ in their name?
You may also like
3 weeks ago
REVIEW: Netflix's new Resident Evil series badly borrows from two incredibly good disaster movies
1 month ago
Holy f*cking sh*t, The Boys REALLY delivered with Season 3
1 month ago
REVIEW: Thor Love and Thunder is equal parts fun and blunder
1 month ago
REVIEW: Pixar's Lightyear is a better Star Wars movie than most recent Star Wars movies
1 month ago
REVIEW: Spiderhead is a slick, pretty, boring episode of Black Mirror
2 months ago
REVIEW: Jurassic World Dominion is this franchise's version of The Rise Of Skywalker
Next Page