Tommy Shelby back to Cork. We'd love to see that!

After walking through Cork in their jocks, stealing lead off the roof and shifting the principal's daughter, the season premiere of The Young Offenders TV show has charmed everyone that's seen it. Despite the fact that the Gardai are still chasing Conor and Jock, the Irish public absolutely adores Cork's biggest blaggards and the lads are pushing for Leeside's most famous gangster to make an appearance in the next season.

As you may know, Peter Foott's comedy was commissioned for a second season and when we caught up with Chris Walley (Jock) and Alex Murphy (Conor), they told us that Tommy Shelby himself is a massive fan of the show.

Hell, if anyone can whip Conor and Jock into shape, it's Tommy Shelby!

Given the fact that Cillian Murphy is also a proud Corkonian, the star of Dunkirk and The Dark Knight trilogy had nothing but kind words to say about The Young Offenders when he met the lads.

"It's great because when you're growing up and wanting to be an actor, Cillian Murphy is just from down the road. To hear he likes the show is just great. We actually met him over the summer while we were filming and he had nothing but nice things to say. He's an absolute legend, we love him," said Murphy.

As for a cameo from the star of Sunshine and The Wind that Shakes the Barley, Alex Murphy and Chris Walley are definitely on board - take a look at their interview below. "Well, we've got the Peaky Blinders haircuts," they said. All that's missing now is an appearance from the actor himself.

A Cillian Murphy cameo? We'd be haunted if that happened!

With regards to filming around Leeside, the two actors said that the people of Cork took immense pride in seeing their city being shown on the TV. 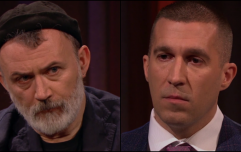 END_OF_DOCUMENT_TOKEN_TO_BE_REPLACED

"Cork people are so proud of the film and the TV show. They're very generous and saying stuff like 'Do you wanna use my house for filming?' People just want to help out and be in it," said Murphy.

On a similar note, Conor's long-suffering mother (brilliantly played by Hilary Rose) had nothing but kind words to say about the love and support that The Young Offenders TV show received from the people of Cork.

"It's great. The people of Cork have really taken a hold and ownership of it. It was really important for us to make it in the city and have so much support from the public. It really showcases Cork in terms of what it's got - not just the English market," Rose said jokingly.

The Young Offenders airs every Thursday on RTÉ2 AT 21:30.


popular
Interactive infographic shows real-time spread of coronavirus outbreak
Here's Week 21 of JOE's 19 in 90 quickfire quiz
Emirates is recruiting new cabin crew members in Galway for tax-free jobs
Galway parish reports record high attendance at Ash Wednesday drive-thru
Creed 3 finally happening as a new writer joins the series
QUIZ: The devilishly tricky grammar quiz that will drive you around the bend
Rallies prove that Sinn Féin are playing the game better than anyone else right now
You may also like
10 hours ago
Gardaí investigating alleged sexual assault on woman at a house in Cork
14 hours ago
Man arrested for spate of burglaries in Cork and Waterford
4 days ago
Woman dies after being struck by car in Cork
5 days ago
Pedestrian in her 70s killed in traffic collision in Cork
6 days ago
Teenage girl dies in fatal road traffic collision in Cork
1 week ago
A preferred route has been chosen for the new Cork to Limerick motorway
Next Page