The average used by a horror movie is usually around 10 gallons.

A few years back, a data analyst worked out for Slate that the average horror movie uses around 35 litres of fake blood, which works out at, more or less, 10 gallons.

For his new horror movie Army of the Dead, writer and director Zack Snyder reckons they used ten times that much. 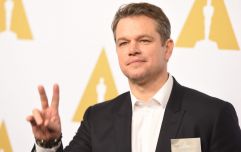 END_OF_DOCUMENT_TOKEN_TO_BE_REPLACED

When JOE took part in the global launch of the new trailer for the zombie epic, Snyder discussed the fake blood used in the movie:

"I think you could measure it more in barrels, like in 55-gallon drums. I bet we could find the make-up effects guys, cos they'll know. But it was many, many gallons. One hundred, maybe more.

"We had this big pallet, and you could see on different swatches, how they would look. And also for the costumes, just how the blood was read [on camera] and stuff like that. Also, we would fire the blood out of canons to see how that would look."

While it doesn't come close to the record - It: Chapter Two still holds that title, thanks to using 4,500 gallons in just one scene - it is still quite a lot of fake blood!

Snyder is returning to the zombie genre for the first time since 2004's brilliant remake of Dawn of the Dead, with the majority of his career since then being comic book and graphic novel adaptations: 300, Watchmen, Man of Steel, Batman V Superman, Justice League.

We can see how his zombie reunion goes when Army of the Dead arrives on Netflix on Friday, 21 May.

The Big Reviewski || JOE · TBR Spotlight: Loki - Episode Two - 'The Variant'
popular
QUIZ: Can you name all these European countries from a list of cities?
The JOE Friday Pub Quiz: Week 248
Matt Damon planning return trip to Ireland to travel around the country
QUIZ: Can you get full marks in this potentially very frustrating general knowledge quiz?
Three men arrested after reportedly attacking staff of premises on South William Street
Aer Lingus introduce new fee to bring carry-on bags onboard flights
The 50 most iconic songs of all time* have been revealed
You may also like
18 hours ago
One of the most iconic thrillers of all time is among the movies on TV tonight
23 hours ago
Five great new movies added to your streaming services this weekend
1 day ago
"Alcohol helps!" - The cast of In The Heights give us some dancing tips
1 day ago
Paul Rudd and Will Ferrell reunite for new dark comedy series The Shrink Next Door
1 day ago
One of the most tense thrillers of the last ten years is among the movies on TV tonight
1 day ago
Derry Girls star Siobhán McSweeney to host brand new travel show
Next Page