"We love Thin Lizzy so f**king much." One legend honours another.

Right from the opening chords of 'The Pretender', Dave Grohl had the entire RDS in the palm of his hand and once again, the Foo Fighters didn't disappoint during their most recent Irish gig on Wednesday night.

In fact, the inclusion of tracks from their first album like 'This Is A Call,' 'I'll Stick Around,' and 'Big Me' were a very welcome addition as they sat comfortably alongside their more well-known tracks such as 'All My Life' and 'Times Like These'.

How's this for a setlist? 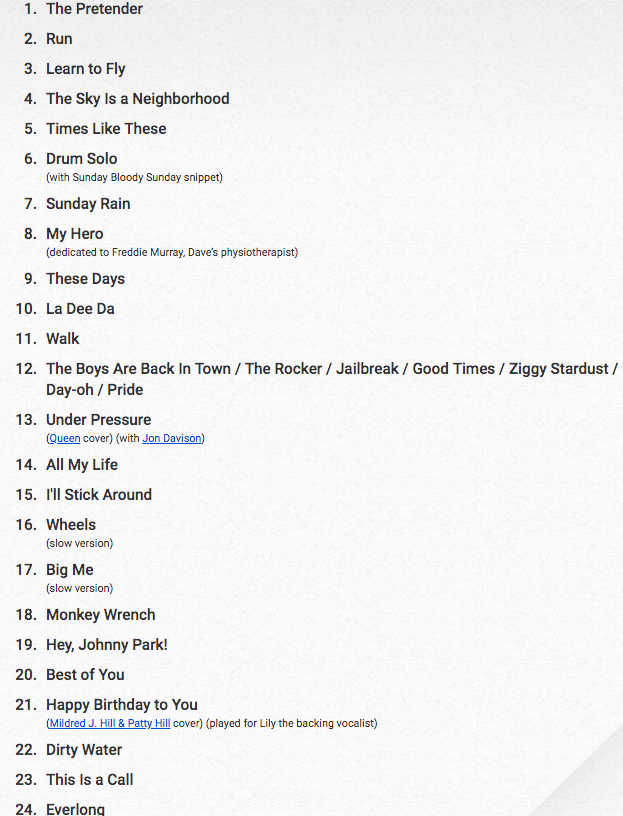 END_OF_DOCUMENT_TOKEN_TO_BE_REPLACED

As is the norm with the band, they knew their audience inside out and Taylor Hawkins definitely endeared himself to the Irish crowd by dedicating a thumping drum solo to U2's Larry Mullen. The Foo Fighters drummer was also wearing a U2 t-shirt and even tried singing a few bars of 'Where the Streets Have No Name' too.

Grohl also dedicated 'My Hero' to an Irishman named Freddie Murray - the physiotherapist that helped the singer get back on his feet after he broke his leg on stage.

END_OF_DOCUMENT_TOKEN_TO_BE_REPLACED

However, another iconic Irish rock 'n roll band got an even bigger tribute than U2 as Dave Grohl covered three Thin Lizzy classics; 'The Boys Are Back in Town', 'The Rocker,' and 'Jailbreak'.

This week marked the 70th birthday of the iconic Phil Lynott and Grohl remembered him in the best way possible.

popular
Harvard study reveals how many times men should ejaculate each month to stay healthy
Colin Farrell shouldn't win the Oscar this year
Netflix has just added one of the best sci-fi movies of recent years
Parents left in shock after gorillas start mating in front of kids at zoo
The 50 most iconic songs of all time* have been revealed
Conor Mcgregor hit by car ‘at full speed’ while cycling
New sci-fi horror set to be this year's A Quiet Place
You may also like
2 days ago
DJ accidentally shoots herself in the face with a confetti cannon while performing
1 week ago
The Last Of Us Episode One features an absolutely perfect needle drop
2 weeks ago
The JOE Friday Pub Quiz: Week 329
2 weeks ago
Eminem turned down $8m to perform with 50 Cent at the World Cup in Qatar
2 weeks ago
Dr Dre forces right-wing politician to stop using his song
2 weeks ago
RTÉ Choice Prize Irish Album of the Year 2022 nominees revealed
Next Page