On Saturday night, U2 were set to perform at St. Louis' Dome on Saturday night, but they were forced to cancel the performance in light of the violent protests that are occurring around the city, after former local police officer Jason Stockley was found not guilty of murder in the 2011 shooting of Anthony Lamar Smith.

The band made a full statement at the time via Live Nation on the cancellation:

END_OF_DOCUMENT_TOKEN_TO_BE_REPLACED

Live Nation and U2 regrettably announce their St. Louis show scheduled for tonight, September 16, 2017 has been cancelled. We have been informed by the St. Louis Police Department that they are not in a position to provide the standard protection for our audience as would be expected for an event of this size. We have also been informed that local crowd security personnel would not be at full capacity. In light of this information, we cannot in good conscience risk our fans’ safety by proceeding with tonight’s concert. As much as we regret having to cancel, we feel it is the only acceptable course of action in the current environment.

Afterwards, Bono took to Instagram to further express his upset at the situation, and quoted Doctor Martin Luther King Jnr in the post: 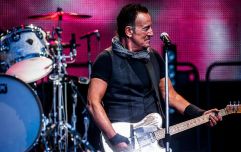 END_OF_DOCUMENT_TOKEN_TO_BE_REPLACED

Deeply saddened at what has happened in St. Louis and having to cancel our show tonight… I found myself reading Dr. King’s speech from the National Cathedral and asking myself is this 1968 or 2017? – Bono. “Human progress never rolls in on the wheels of inevitability… we are coming to ask America to be true to the huge promissory note that it signed years ago. And we are coming to engage in dramatic nonviolent action, to call attention to the gulf between promise and fulfillment; to make the invisible visible.

popular
Seven more suspected cases of unexplained hepatitis in Ireland under investigation
Netflix has just quietly added 12 big movies to its library
Gardaí investigating firearm being discharged near film set in Donegal
Amazon Prime Video has just added 21 big movies to its library
Dáil passes motion to secure public ownership of National Maternity Hospital site
Has anyone seen Mr Tayto?
The six Eurovision countries with "irregular voting patterns" have been revealed
You may also like
1 month ago
Man wins $450,000 lawsuit after employer threw him a birthday party he didn't ask for
5 months ago
Deaths confirmed after Amazon warehouse partially collapses in "mass casualty" incident
5 months ago
Three students dead following school shooting in Michigan
5 months ago
Kyle Rittenhouse breaks silence after not guilty verdict
7 months ago
Jonah Hill asks fans to stop making comments about his body
7 months ago
Police in the US confirm cause of death for influencer Gabby Petito
Next Page