This is a great story and shows the Aslan frontman is one of the good guys...

You may have seen the footage of U2 playing Angel of Harlem for Christy Dignam of Aslan at the sold out 3 Arena last night.

Well it seems that U2 had invited the Aslan frontman along with guitarist Joe Jewell to perform with them on stage Friday night, but Christy and Joe had to decline, as they wanted to make good on their promise to play a charity event for three young boys. 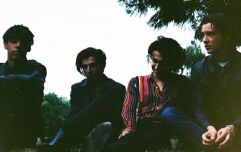 END_OF_DOCUMENT_TOKEN_TO_BE_REPLACED

Brandon, Kallum and Keane Barrett suffer from a rare disorder called Ehler Danlos Syndrome (EDS), and they can't receive treatment in Ireland which necessitates in self-funded trips to the UK and Belgium for treatment.

Christy and Joe performed along with the band The Reflex, at their fundraiser on Friday night in the Radisson Blu Hotel, turning down the chance of going on stage with U2, in order to help the Barrett's raise money.

The Barrett's were over the moon that Christy fulfilled his promise to play at their fundraiser and they wanted to share this story so people know what a good guy Christy is.

Kallum has to undergo two major surgeries in the coming weeks so all here in JOE Towers wish him well, and if you want to know more about these three brave boys, you can find them on Facebook here.

Advertisement
House of Rugby Ireland · Quinn Roux on finding a home in Ireland and Mike McCarthy brings the absolute HEAT!
popular
Ireland's first Covid-19 vaccine recipient gets her second dose
Joe Exotic has limo waiting as he expects presidential pardon from Donald Trump
Pardonpalooza: Donald Trump planning 100 pardons on last day of presidency
5 upcoming movies about the end of the world
Met Éireann issues weather advisory ahead of "increasingly wintry" weather this week
QUIZ: Name all the countries of the EU that contain 2 vowels or less
WHO warns of 'catastrophic moral failure' with regards to Covid vaccine
You may also like
2 months ago
The JOE Music Quiz: Week 31 - Special U2 Edition
1 year ago
U2's Larry Mullen Jr. writes heartfelt tribute to the late, great Larry Gogan
2 years ago
WATCH: Damien Rice, U2, Imelda May and more perform at Dublin's annual Christmas Eve busking session
2 years ago
Gardaí issue statement regarding road closures due to U2 gig in Dublin
2 years ago
Do we like Bono or not? Exploring one of Ireland's greatest dilemmas
2 years ago
Director of My Left Foot talks about which part of U2's history he'd focus on making a movie about
Next Page