May he rest in peace.

Country music legend Kenny Rogers, a Grammy award winner whose career spanned six decades, has died at the age of 81.

"Rogers passed away peacefully at home from natural causes under the care of hospice and surrounded by his family," his family said in a statement late on Saturday night. 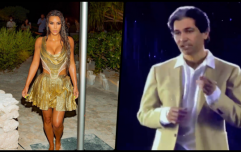 END_OF_DOCUMENT_TOKEN_TO_BE_REPLACED

“Kenny Rogers left an indelible mark on the history of American music.

“His songs have endeared music lovers and touched the lives of millions around the world."

The family said they were planning a small, private ceremony due to concerns over the Covid-19 outbreak.

A public memorial is planned at a later date to celebrate his life.

Rogers was best known for his songs 'The Gambler,' 'Lucille' and 'Coward Of The County'. He also won three Grammy awards and topped the charts in the US in the 1960s and 1970s.

The Country Music Association paid tribute to Rogers saying he had “forever left a mark on country music’s history”.

The Big Reviewski || JOE · TBR Spotlight: Loki - Episode Six - 'For All Time. Always.'
popular
Professor suggests Garda checkpoints at Irish border to halt spread of Delta variant
Sunshine and high temperatures to come to an end as Met Éireann predicts week of thunder and rain
QUIZ: Ignite your brain cells with this testing general knowledge quiz
The JOE Movie Quiz: Week 112
The JOE Music Quiz: Week 67
The JOE Friday Pub Quiz: Week 253
One of the best comedies of the last five years is among the movies on TV tonight
You may also like
2 days ago
Belfast judge finds "real prospect" Omagh bombing "could have been prevented"
2 days ago
Covid-positive man boards flight disguised as wife
2 days ago
Gary Lineker to host new ITV game show, Sitting on a Fortune
2 days ago
EU will "not renegotiate" original post-Brexit Northern Ireland protocol
2 days ago
Uncle of Sophie Toscan Du Plantier hits out at Ian Bailey calling him "deeply narcissistic"
3 days ago
Emily Ratajkowski to sponsor Bantry Basketball underage teams
Next Page