Some acts thrive in a festival setting, others struggle, and then there's N.E.R.D.

They barely react, and why should they?

END_OF_DOCUMENT_TOKEN_TO_BE_REPLACED

N.E.R.D have had their day. December brought their revival record; Nobody Ever Really Dies, which resulted in nobody ever really caring.

Cuts from that snooze-fest bounce around Stradbally accordingly as Pharrell stops '1000' before it can get going to demand circle pits that never arrive and before dropping the half-decent 'Lemon' twice at the end in a shambolic grasp to win the day.

When the most exciting thing about your hour is the use of a Rage Against the Machine song as your intro music, you should know that it's over, dude.

Before that mess, Dua Lipa convincingly makes the case to be the main event, and not third in line.

END_OF_DOCUMENT_TOKEN_TO_BE_REPLACED

A nod to overall Saturday night headliners Massive Attack, for they are Massive Attack and you shouldn't waste your breath arguing with the likes of 'Angel' and 'Unfinished Sympathy' - nor the surprise addition of the superb Young Fathers - but in a weekend where torches have been passed, it is Dua Lipa's time to shine.

This is a stellar pop presentation, even if the continual crowd demands to throw hands up and so forth are a wee bit wedding DJ. 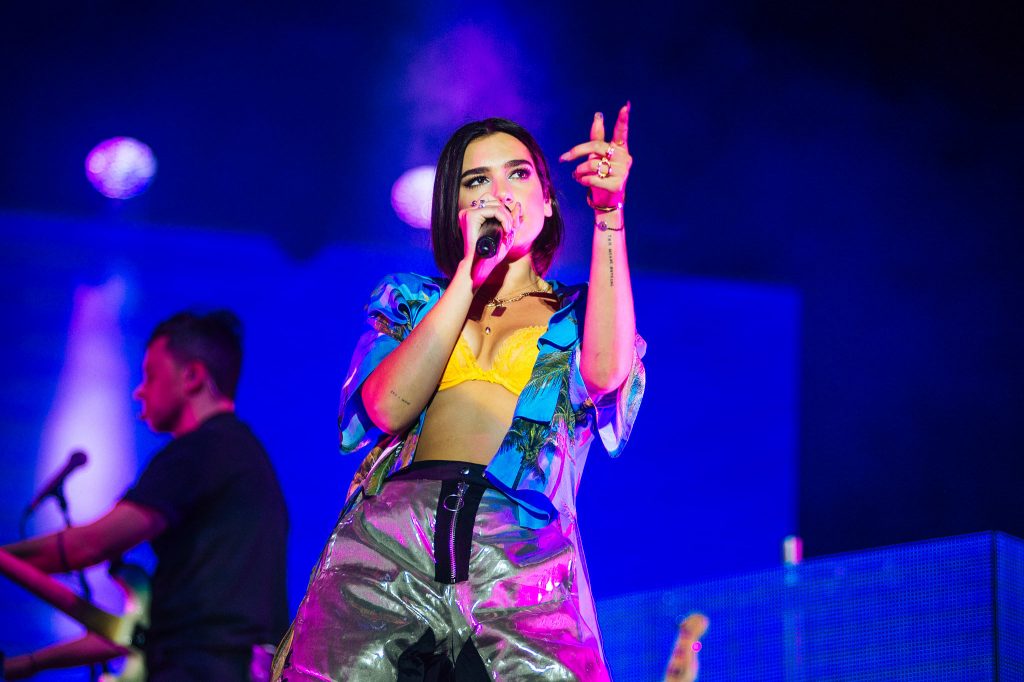 END_OF_DOCUMENT_TOKEN_TO_BE_REPLACED

That aside, the reality is that Lipa is A-list right now, and her set is a stormer as the main expanse of the Picnic threatens to overflow.

'One Kiss' may be fairly lacking as far as the Sound of the Summer goes but the masses eat it up with a spoon.

'IDGAF' and the chart-conquering 'New Rules', meanwhile, unite all walks of life under the night sky; the surreal sight of groups of lads roaring such specifically pained words back at one another a strange, welcome sight.

But the real star of the show today - aside from the relentlessly delightful Sigrid, who provided not one but two knockout turns in the space of a couple of hours - is Dermot Kennedy.

The Dublin troubadour has enjoyed something of a lightning bolt rise to the top as he continues to make his name on a worldwide scale, and there's something really quite fascinating about him not quite yet being a legitimate household name but still boasting intense devotion from those in the know.

As such, the Rankin's Wood tent is turned into a house of hardcores as Kennedy and his band claim the midpoint of the day for themselves.

His wounds are communal, and his words glide back in their opening breaths to the point that even a voice as commanding as this one is almost drowned out by pure devotion.

On that theme, it's a smart move to close things off with the help of the Dublin Gospel Choir, who lend several searching hands to 'Moments Passed' and 'Glory', which deftly follow on from 'An Evening I Will Not Forget' and 'Young & Free', a pair of song titles that do a better job of describing the atmosphere here than another paragraph will manage.

Hozier, himself no stranger to higher powers, pops up jack-in-the-box style as a surprise assistant to the storied Mavis Staples in a fair union that doesn't quite grab a major attendance on the Main Stage due to himself's presence being a last-minute rumour rather than an advertisement.

Nice to amble past, nonetheless, and this writer will never get tired of hearing The Band's 'The Weight' in the hot sun, and nor should you, dear reader.

Elsewhere in County Laois on a heatwave-recalling Saturday; young upstarts Inhaler make their mark early doors on Other Voices courtesy of up-tempo indie pop that harkens back to the early days of U2, as if the two were somehow related.

A stroll through a busy site midway through the day serves up the chance to catch the triumvirate of Saint Sister, Jafaris and Kormac as they link up for the compelling 'Causing Trouble' on the 3 Stage, while a detour to see Maggie Rogers leaves one vaguely resentful of a band that fail to capture her potential.

Friendly Fires, on the comeback trail, enjoy a glorious return to Ireland, and to the live arena itself, following a lengthy hiatus. The rebirth is real as one of the liveliest parties of the weekend kicks into overdrive.

The band haven't aged a day, and thanks to clever updates, neither have all-timers 'Skeleton Boy' and 'Paris'.

Later, the ever-intriguing Wolf Alice provide a nice contrast with their own brand of aggressive stagecraft.

Violent and vibrant, the London collective tear their way through the Electric Arena as Ellie Rowsell - her shock of blonde hair bringing a supercharged Debbie Harry to mind at times - confirms her status as one of the most interesting and arresting musicians of her generation.

As ever, they mix the rough with the smooth quite brilliantly; 'Yuk Foo' and 'Don't Delete the Kisses' making for a perfect microcosm of their sound as screams eventually tattoo the walls.

It's a dizzying mix, and a fair summation of the midway point of this particular bash.

popular
Man arrested on suspicion of the murder of Irish man in London
Here's how to make €9-11 on Revolut in just a few minutes
New car-free town with population of 85,000 set to be built in Dublin
Galway City Council street cleaners claim Lotto jackpot worth over €5.5 million
Elderly Irish man stabbed to death on mobility scooter in London
QUIZ: Can you name all the countries beginning with A?
A terrific '90s crime drama is among the movies on TV tonight
You may also like
11 months ago
'It wasn't very flattering' – Leo Varadkar breaks silence on festival photo fiasco
11 months ago
Leo Varadkar pictured at UK festival on same weekend Electric Picnic would have taken place
11 months ago
Arts Minister Catherine Martin exploring "all options" for Electric Picnic to take place
11 months ago
Laois County Council will not reconsider its Electric Picnic licence refusal
11 months ago
Electric Picnic organiser calls for festival to go ahead after CMO's comments
1 year ago
Belfast concert organiser "bitterly disappointed" by Electric Picnic decision
Next Page