With his latest album, Revival, about to be released soon, Eminem surprised Saturday Night Live audiences during his recent musical guest gig.

Instead of performing two separate songs, as is the norm for musical guests, he appeared only once and played a medley of three songs, including two of his biggest hits. 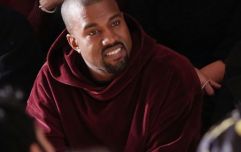 Kanye West no longer goes by the name Kanye West

END_OF_DOCUMENT_TOKEN_TO_BE_REPLACED

Accompanied by an orchestra, the rapper kicked off the nine-minute performance with “Walk on Water,” his new track which was recorded with Beyoncé.

After that segment finished, the duo instantly shifted chords and performed “Love the Way You Lie,”  and "Stan" Eminem’s famous duets with Rihanna and Dido.

Kudos to Skylar Grey because she did an excellent cover of Beyoncé, Rihanna and Dido’s vocals.

Watch the moving performance above.

It's safe to say that Eminem fans are absolutely pumped to see Slim Shady back.

Eminem is a genius. That is all. #SNL

Eminem performing Stan on SNL got me like pic.twitter.com/ZOrKDPTXjh

Eminem goes from “Walk on Water” into “Stan” then “Love the Way You Lie”. Let's hope we will still get something new and that's not all #Eminem #Revival

The Big Reviewski || JOE · The Big Reviewski with Dune, a mini-Hangover reunion & the best of Timothée Chalamet
popular
WhatsApp to stop working on 53 phone models, including iPhone 6
New true crime documentary series from Netflix looks gripping
PICS: The man with the biggest penis in the world has one unbelievable problem with it
The 50 most iconic songs of all time* have been revealed
Updated Status Orange warning issued for three counties as heavy rain to continue
People think they've figured out the ranking of the viewers on your Instagram Stories
Clashes between protestors and private security as tenants removed from Dublin property
You may also like
11 months ago
Dave Chappelle refers to Trump as a "hilarious racist" in SNL monologue
1 year ago
Brad Pitt analyses Trump's Covid-19 comments as Dr. Anthony Fauci in SNL cold open
1 year ago
WATCH: Eddie Murphy was joined by some of the biggest names in comedy for his SNL return
2 years ago
WATCH: Jason Momoa was properly hilarious as a gigolo on Saturday Night Live
2 years ago
WATCH: Saturday Night Live have boldly attempted a Love Island sketch starring Phoebe Waller-Bridge
2 years ago
Saturday Night Live fire Shane Gillis for using racial slurs
Next Page