He was referring to a decade-old song that leaked in 2019, on which he said "of course I side with Chris Brown".

On a song off his new album, Eminem has apologised to Rihanna over a lyric he rapped in a song that was released last year.

The song, which only saw the light of day last year, was actually recorded 10 years ago, and it heard the Detroit artist rap "of course I side with Chris Brown". 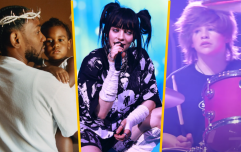 END_OF_DOCUMENT_TOKEN_TO_BE_REPLACED

On his new song 'Zeus', Eminem raps: "And wholeheartedly, apologies, Rihanna / For that song that leaked, I'm sorry, Ri / It wasn't meant to cause you grief / Regardless, it was wrong of me."

Chris Brown was charged with assaulting Rihanna in 2009.

The song comes on his new album Music to be Murdered By Side B, which accompanies an album he released in January of this year.

At the time the track leaked last year, Eminem's spokesperson said: "This is a leak of something that's over 10 years old. After Eminem recorded it, he scrapped it, and rewrote it."

Since 2010, Eminem and Rihanna have collaborated on a number of occasions, including on songs 'Love the Way You Lie', 'Numb' and 'Monster'.

popular
5 years ago, Hollywood took a massive gamble on a huge sequel... and lost big time
Netflix has just added 12 very big movies to their library
One of the most underrated crime thrillers of recent years is among the movies on TV tonight
Tom Hardy set to play Hannibal Lecter-type serial killer in new series
Guy Ritchie's new war movie looks like it'll be a very emotional watch
Netflix backtracks on anti-password sharing measures following user outcry
The 50 most iconic songs of all time* have been revealed
You may also like
2 months ago
Helena Bonham Carter blasts 'cancel culture', defends Johnny Depp and J.K. Rowling
1 year ago
Barbados cuts ties with UK and becomes a republic
1 year ago
The top 10 'greatest of all time' songs have been revealed
3 years ago
Rihanna turns down Super Bowl half-time show as she couldn't be "a sellout"
3 years ago
Donald Glover and Rihanna's top-secret new project is arriving very soon
4 years ago
Rihanna is suing her father for allegedly trading on her Fenty brand name
Next Page