Five, B*Witched, S Club, Vengaboys, and more are all playing a belting '90s festival next summer

The lineup is heaven for anyone that loves '90s pop.

To be honest, I'm extremely interested to hear what The Vengaboys have to say on Brexit. Do they like to party in the acknowledgment that the backstop is secure?

Is the Vengabus coming to the DUP's annual party?  Lads, these are important questions.

END_OF_DOCUMENT_TOKEN_TO_BE_REPLACED

Well, while the DUP mull over the agreement that has been struck between the EU and the UK government, perhaps they could kick back and listen to some of 5ive's beloved tracks too? It might lighten the mood.

Somewhere, you just know that Sammy Wilson is listening to 'Got The Feelin'' while bopping away and thinking about the union between the UK and Northern Ireland.

C'est la vie. Hey, what would you know, B*Witched are at this festival too!

As for the rest of us music fans, the ultimate cheesy throwback is coming to Punchestown Racecourse this summer and there are so many iconic '90s bands, artists, and jams here that you'll be spoiled for choice.

Christ, we'd go alone just to hear East 17 perform 'It's Alright and ' 'Stay Another Day.' Anyways, the rest of the billing features S Club (insert number of bandmates that are still there), 2 Unlimited, and loads more.

The 'Biggest '90s and '00s Disco Outdoor Festival' takes place on Saturday, 27 June and tickets go on sale tomorrow with early bird tickets start at €45. However, there are different pricing categories available.

If you love '90s pop, there's also a similar themed gig that's taking place in Dublin's 3Arena this weekend too. 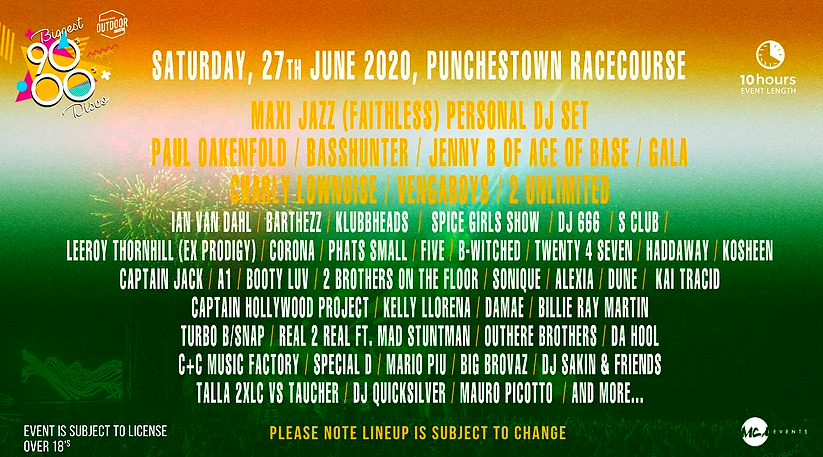 Take a look at what's in store for that one.

Here is the running order for The Biggest 80s and 90s Disco on Saturday! Get those dancing shoes ready! pic.twitter.com/uz7Z7JGHMl