With an exceptionally awful title.

You've seen the Netflix Fyre Festival documentary aka the first great horror of 2019 by now, right?

If not, get on that. It really is quite the compelling disaster. 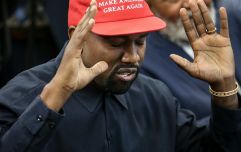 END_OF_DOCUMENT_TOKEN_TO_BE_REPLACED

If you have no idea what Fyre Festival was; just imagine a party for impressionable and annoying rich people that got wildly out of hand when it was revealed that those running it were committing high scale fraud.

That nobody died when a Lord of the Flies-style scenario broke out on a remote island is something of a miracle.

Instead, we all had a bit of a laugh about it.

Billy McFarland, supremo behind said festival who decided to just power on in the face of overwhelming advice to not go ahead with his dream, wasn't laughing in the end.

Currently serving six years in a medium security prison where he's apparently best mates with The Situation from Jersey Shore - yep - McFarland has a "comeback plan" in the works.

A New York Magazine report on said plan notes that a memoir is on the way, entitled Promythus: The God of Fyre, because of course it is.

Self-published and originally set to arrive last month, the book - if it does indeed surface - will tell McFarland's story from when he first launched a start-up in 2011 until the day a pair of handcuffs were placed upon his person.

END_OF_DOCUMENT_TOKEN_TO_BE_REPLACED

In a piece of information that should surprise absolutely nobody, McFarland has admitted taking inspiration from Jordan Belfort, he of The Wolf of Wall Street fame.

The 27-year-old also pointed to underground celebrity poker mastermind Molly Bloom, who also had a film made about her in the form of Molly's Game.

So yeah, he probably expects a big screen adaptation of his own work.

And it'll likely happen, given the success of the Fyre documentaries - there's also a Hulu one - and the general public interest.

popular
Clint Eastwood's final western is among the movies on TV tonight
The Toy Show DJ brothers have been offered their very first gig
The 50 most iconic songs of all time* have been revealed
The JOE Friday Pub Quiz: Week 271
PCR tests to be required for all international arrivals to the UK
Ryanair's "virtue signalling" claims are indicative of Ireland's view on the Irish language
One of the most shocking corporate documentaries ever made is available to watch this weekend
You may also like
7 hours ago
Two big new Netflix shows and four more trailers you might have missed this week
12 hours ago
The full list of all the new shows and movies coming to Netflix in December
3 days ago
New Netflix series Hellbound has knocked Squid Game off the top spot
5 days ago
Kevin Spacey ordered to pay $31 million for breaching House of Cards deal
1 week ago
Netflix has quietly added 10 big new movies to its library
1 week ago
The "next Game of Thrones" and 7 more movies and shows to watch this week
Next Page