Fans of Bridget Jones's Diary should be VERY excited about this.

For the best part of a decade, it was almost impossible to escape the all-pervading power of Gabrielle.

Kicking off with 'Dreams' back in 1993, over the next ten years she went on to sell over 5 million records in the UK alone, as well as scoring two No. 1 singles, ten Top 10 singles, a No. 1 album and five Top 10 Albums. 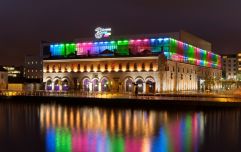 END_OF_DOCUMENT_TOKEN_TO_BE_REPLACED

She is also a two-time BRIT Award winner - Best British Breakthrough Act in 1994 and the Best British Female Solo Artist in 1997 - and she also picked up various MOBO Awards, not to mention an Ivor Novello for Outstanding Song Collection.

Aside from that killer first single, Gabrielle also had the incredible 'Rise', as well as Bridget Jones's Diary soundtrack highlight 'Out Of Reach', which essentially become the go-to anthem for the heartbroken for a number of years after the movie came out.

All of that is just a reminder of just how big an artist she was back in the day, and still has a multitude of fans today, and it should make them all very happy to hear that she is heading to Ireland in early 2019 to play the hits, as well as tracks from her new album Under My Skin.

Gabrielle will be performing at the Olympia on 22 March 2019, and tickets are available from the usual outlets right now.

In the meantime, who is up for singing along with us to this?

popular
Simon Cowell concerns fans with appearance as they 'don't recognise him'
The JOE Friday Pub Quiz: Week 323
Netflix has just added 30 big movies to its library
Miss Croatia wears revealing outfit at World Cup game despite Qatar's dress code
20 years ago, one of the best sci-fi movies of the 21st century was a box-office bomb
Junior doctor 'fell asleep' at the wheel after 12-hour shift then mowed down two women and two kids
Starbucks worker breaks down in tears after they're scheduled to work 8 hours
You may also like
3 years ago
Lionel Richie announces Irish gig for 2020
3 years ago
Hozier has announced a massive Dublin gig just in time for Christmas
3 years ago
Vengaboys to headline incredible '80s and '90s night in Waterford in August
3 years ago
The Jonas Brothers have announced a massive Dublin gig
3 years ago
We have it on good authority that Drake might be heading to this venue after his Dublin gig this week
3 years ago
BROS announce two Irish gigs this summer
Next Page