There would have been surely nothing more Eurovision, nothing more gloriously non-sensical, than Australia winning a competition it doesn't really belong in.

They didn't though, as Ukraine's Jamala took home the prize with the politically-charged song, '1944'.

Australia, however, (which, if you didn't know, is on the other side of the world) was competing in the Eurovision Song Contest for the second year running. 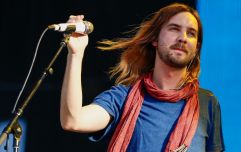 If you absolutely have to con your way into a music festival, do it like this

END_OF_DOCUMENT_TOKEN_TO_BE_REPLACED

Despite taking place in a different continent, the event is a smash hit down under, pulling in around three million viewers each year.

Eurovision has been broadcast on Australian network SBS for 30 years. SBS is part of the European Broadcasting Union and that seems to be solid enough for the competition's organisers to allow them a slot.

Australia's entrant for this year's competition was Dami Im, with a song called 'Sound Of Silence'. She seemed to break the unwritten rules of Eurovision by actually putting forward a half-decent tune.

Divine! @Damiandmusic has come a long way to sing here and we're so glad she did! #AUS #Eurovision https://t.co/nTWsVELzPT

The internet couldn't decide what to make of it all...

Saw Australia though. Cheating by having a good song/singer.

Australia is my favourite European country so far. #Eurovision

Australia putting a good tune in with someone who can actually sing. They don't know how to do Eurovision properly!

popular
Government halts plan to subsidise antigen tests because “market” has sorted it
Landslide, earthquake, 'huge dump of snow' and female Taoiseach predicted for Ireland in next three years
Eight arrested following brawl in Galway cemetery
Amazon Prime Video has quietly added 10 big new movies to its library
Yet another new Wetherspoons is set to open in Dublin city centre
The JOE Movie Quiz: Week 130
Revolut co-founder donates €1.1 million to Toy Show appeal
You may also like
1 week ago
Australian Prime Minister makes headlines with "Irish girl in a brewery" comments
3 weeks ago
Australian police release audio of moment Cleo Smith was found
3 weeks ago
Galway castle makes list of weirdest Airbnbs in the world
3 weeks ago
Landmark court decision set to have major impact for Irish backpackers in Australia
3 weeks ago
WATCH: Australian police release footage of the rescue of 4-year-old girl after she was missing for two weeks
1 month ago
Nearly a third of young people intend to emigrate in the next 12 months, new survey reveals
Next Page