The coins are back in town.

The coin was revealed on Tuesday morning by President Michael D. Higgins at St. Kevin’s College, Crumlin, the former school of the Dublin icon. Lynott was born in 1949, making 2019 the 70th annivserary of his birth. 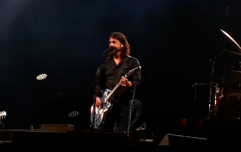 END_OF_DOCUMENT_TOKEN_TO_BE_REPLACED

The piece is struck in .925 sterling silver to proof quality. It was designed by artist Sandra Deiana and pays tribute to Lynott with a depiction of him in a characteristic pose with his bass guitar and sound waves emanating from it.

Behind the main focal point of the design is a graphic representation of a vinyl record.

The Central Bank has noted that the coins are for collectors and aren't intended for general circulation. Unlike coins minted for general use, collectors' coins such as the Lynott coin are individually handled and protectively stored in order to prevent tarnishing.

Lynott is the second Irish musician to be honoured with such a coin after a similar €15 silver proof coin was launched in 2018 in memory of Rory Gallagher.

Central Bank Deputy Governor Sharon Donnery, who grew up in Crumlin, said: "The Central Bank is proud to be issuing this fabulous coin to celebrate such an iconic musician. We are particularly pleased to be launching it in Crumlin: Phil Lynott grew up on Leighlin road and went to school here at St Kevin’s College.

"Phil Lynott’s iconic status, his contribution to modern Irish music and the enduring popularity of his music is why the Bank has issued a coin honouring him."

The coins will be made available to the public starting at 10am on Wednesday morning (27 November). More information here.

House of Rugby Ireland · Quinn Roux on finding a home in Ireland and Mike McCarthy brings the absolute HEAT!
popular
Joe Biden inauguration rehearsal paused as Capitol building goes into lockdown
The JOE Movie Quiz: Week 85
QUIZ: Name all the countries of the EU that contain 2 vowels or less
Over 400 fines issued by An Garda Síochána for non-essential travel
QUIZ: Can you name the Marvel Cinematic Universe film from just a single screen shot?
Garda issue warning about courier payment scam
Irish punters could turn €0.98 into hundreds of millions* with a bet on the Super Jackpot
You may also like
4 months ago
Official full-length trailer released for new Phil Lynott documentary
2 years ago
A feature-length documentary about the iconic Phil Lynott is being made and you can be involved
2 years ago
RTÉ are showing a documentary about the legendary Phil Lynott tonight
6 years ago
Gallery: Saluting the late great Phil Lynott on what would have been his 65th birthday
6 years ago
Video: Thin Lizzy get the LEGO treatment and it is tremendous
7 years ago
Saturday Night Warm Up Tracks: Thin Lizzy, Disclosure and Young the Giant
Next Page