A necessary analysis of all 50 covers on Spotify's #ThrowbackThursday playlist

You might be aware of Spotify, the green-tinted streaming giant that gets you through the day with infinite access to all the music ever created ever... apart from some things they can't legally provide.

Life before such a service was an arduous mess of CDs, mini-discs, cassette tapes and VHS heroics for live concerts taped off the BBC and so on.

Now, if our signal drops for more than 60 seconds and we can't listen to 'Bohemian Rhapsody' on the commute to work, a very modern panic attack ensues.

Spotify are presumably aware of this, because they have a frankly obnoxious amount of playlists designed to ease that sweet, sweet existential crisis.

#ThrowbackThursday is one such endeavour, a weekly collection of Songs You Definitely Know And Love. This week, it's all about famous covers.

Let's go through every single one of them, shall we?

Aka the reason that yer man from The Zutons was able to buy a house at a young age.

A tricky one, this. No, Cyndi Lauper's version of this song is not the original.

Yes, it surpasses the original and emerged as its own iconic thing and she probably deserves most of the credit. There'll be more on this line later.

I think we can all agree that All Saints did it better when they covered the song in 1997.

The late, great Queen of Soul takes on an Otis Redding gem and crafts a bona fide classic.

'Twist and Shout' - The Beatles

The Beatles are a weird one, in fairness. In 2018, they still provoke religious fervour if you dare say that you're not really that into them.

The original boy band - and there's nothing wrong with that - made a good fist of it with an oft-covered floor-filler. Fair play to them.

Admit it, you thought this was the original flavour and that the nu-metal Marilyn Manson riff was following on from Marc Almond's iconic track.

Alas, 'Tainted Love' first arrived in 1964 from the pen of Four Preps man Ed Cobb. Ed is long dead, but we're sure he'd admit that the ice-cold Soft Cell vintage is king.

How excited we were when it looked like Girls Aloud were taking on a Van Halen song.

In the end, it was actually a Pointer Sisters belter, repurposed for Love Actually - which is a toxic and dreadful film, by the way - and a fine throwaway tune it is, too.

Real talk; Girls Aloud are wildly underrated and have a pretty bulletproof run of singles.

Tina Turner taking on a Bonnie Tyler anthem? As wildly over-performative American soccer commentators say; are you kidding me?

'The Best' is fantastic and it holds up exceptionally well. Whack it on there.

'Killing Me Softly With His Song' - The Fugees

'Killing Me Softly' has been covered by so many artists that honestly it would be a waste of time and digital column inches to list them all, so stick with the definitive and essential rendition.

The lads! They're back, don't you know.

Get ready for that Croke Park gig with a typically buoyant Billy Joel cover.

'You've Got The Love' - Florence + The Machine

Bit of a banger from Florence Welch here, and the original incarnation is no slouch, either.

'Hounds of Love' - The Futureheads

Rock songs should never be this tame and homogenous, even for pop icons. 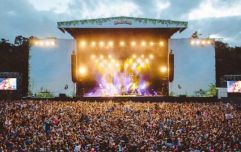 END_OF_DOCUMENT_TOKEN_TO_BE_REPLACED

Fun fact: I have the brand of TV that this song accompanied back in the mid-2000s. I'm not naming said TV, which has actually held up pretty admirably, as this isn't sponsored content.

As for the track, it's a bit soul-crushingly dull, isn't it? Stick with The Knife instead.

'I Will Always Love You' - Whitney Houston

She will, you know. Once heard, never forgotten in fairness to the lady.

In related news, Dolly Parton is some songwriter.

One of the best-selling singles of all time and a track that will always make you picture the slick-haired dude singing it just by the very mention of its name.

Fun fact #2: This writer will fight anyone who slams nu metal. Misunderstood genre, come at me.

Yeah, there was a lot of garbage and I'm not about to go to war for Alien Ant Farm* but people dig their Michael Jackson cover and I'm not here to take that away from them.

For all their influence and pop mastery, I'm not fully convinced that Pet Shop Boys get the credit that they deserve.

The masters of their craft scored big here with a song that has been recorded and released over 300 separate times and counting.

Without meaning to sound cruel, there was always a fair whiff of desperation to Geri Halliwell's post-Spice Girls solo career.

Her attempt at emulating The Weather Girls has enough camp credibility and the video got a lot of play, but it's forgettable enough.

'It's All Coming Back to Me Now' - Celine Dion

There's a trick to Spotify playlists, so long as you give people faith not to just hit the shuffle button.

Sequencing is of paramount importance. You have to get the mood, tone and rhythm right.

What I'm getting at here is that this drip of a song is killing my buzz at a pivotal stage of this list.

'Make You Feel My Love' - Adele

C'mon, you thought this was an Adele Laurie Blue Adkins OG. It isn't. Bob Dylan, mate.

'I Heard It Through The Grapevine' - Marvin Gaye

Okay, music is subjective and blah, blah, blah but if you know literally anyone who doesn't think that 'I Heard It Through The Grapevine' is a masterpiece, perform a citizen's arrest.

Muse get their show-tunes on in downbeat fashion. It's alright?

'The Tide Is High' - Blondie

Not as good as the Atomic Kitten version, but what is?

Just joking, Blondie are one of the greats. Parallel Lines just turned 40, so get on that.

'Nothing Compares 2 U' - Sinéad O'Connor

Simply put; one of the best songs ever created.

Prince wrote it - and his recently resurfaced version is wonderful, in spite of all that family estate murkiness - but Sinéad O'Connor mastered it.

There aren't enough superlatives for this, it's timeless, beautiful, heartbreaking, somehow life-affirming and an exceptional showcase for a defiant artist that this country should be proud of.

An odd one given that the Bee Gees wrote this song for Australian singer Samantha Sang only to later steal the spotlight with their own version many years later.

Destiny's Child did a decent take on it, too.

The ever-innovative Björk works her magic on a '50s standard. One of the great covers.

'Limit To Your Love' - James Blake

And as long as we're keeping things glacial, you can't go wrong with James Blake.

Twee, saccharine trash that was no doubt used for a Christmas ad and I'm not going to dignify this further by checking.

'Love Me For a Reason' - Boyzone

The other lads! Boyzone lived for a cover didn't they? Decent.

From the Shrek soundtrack and totally horrible, it's Smash Mouth.

Smash Mouth have become their own unique modern corner of pop culture in that they don't just inspire memes, but have transcended the practice altogether.

And then there's this, the most upsetting piece of media ever created.

I recall this song being everywhere at the time and also being a little bit afraid of Cher.

We're probably all a bit scared of her, even now.

'I Fought the Law' - The Clash

A cover that outdid another cover that popularised the Crickets original, and infinitely better than Colin Farrell's pub brawl take on it.

Christ, what a terrific song. Again, the first incarnation courtesy of Talk Talk is gold, but goddamn did Gwen Stefani and the boys knock this out of the park,

'Take Me To The River' - Talking Heads

David Byrne can cover any song he damn well pleases.

26 years passed before Kylie Minogue announced herself to the world with a now-signature pop anthem.

I'll level with you, reader. 50 songs is a lot to get through and Happy Mondays remain a mystery that this writer never wishes to solve.

We don't really need a SuperValu version of one of the finest R&B songs of all time, thanks man.

Again, you'd be forgiven for not realising this wasn't Buckley's own work.

I mean, you should know it's from the wonderful soul that was Leonard Cohen, but Buckley's imprint was so powerful and memorable - not to mention tragically poignant given his untimely exit - that the case can realistically be made that it's the superior effort.

'The First Cut Is The Deepest' - Rod Stewart

Ah, Rodders. So wounded, so grizzled, so pure.

Jack and Meg meet Burt and it's perfectly enjoyable.

Hell yeah! Nu-rave was mostly a load of bollocks that haunted the mid-noughties but Klaxons updating Grace's superb 1995 dance epic? I'll take all of that you got.

'I Shot The Sheriff' - Eric Clapton

Here's what Eric Clapton had to say during a Q&A in London back in 1976 following a film screening.

"I used to be into dope, now I’m into racism. It’s much heavier, man. Fucking wogs, man. Fucking Saudis taking over London. Bastard wogs. Britain is becoming overcrowded and Enoch will stop it and send them all back. The black wogs and coons and Arabs and fucking Jamaicans and fucking… don’t belong here, we don’t want them here.

"This is England, this is a white country, we don’t want any black wogs and coons living here. We need to make clear to them they are not welcome. England is for white people, man. We are a white country. I don’t want fucking wogs living next to me with their standards.

"This is Great Britain, a white country. What is happening to us, for fuck’s sake?”

But he didn't shoot the deputy, so a Bob Marley cover is a-okay.

Billy Corgan goes all Fleetwood Mac in a gentle, wistful and quite sweet cover that doesn't stray too far from the original but makes for a nice Sensitive Billy Corgan showcase.

A truly astonishing piece of work, particularly when coupled with a video that vividly illustrates the life and times of Johnny Cash as the light began to fade.

'Hurt' is so truly special that even original writer, Nine Inch Nails supremo Trent Reznor, conceded that the song now belongs to the late country legend.

Both tracks are works of art in their own right, but we'll give it to The Man In Black on this occasion.

🎧 The Football Spin: Why it’s time for Ole Gunnar Solskjaer to be a little less humble