She was representing the UK in the contest when a protester stormed the stage and grabbed the mic.

The UK's entry in the Eurovision Song Contest, SuRie, has spoken out after a stage invader ruined her performance last night.

After storming the stage and grabbing the mic, a man - whose identity has since been revealed as 'Dr ACactivism’ - appeared to shout: "For the Nazis of the UK media we demand freedom". He was quickly ushered offstage by security and SuRie managed to complete her performance. 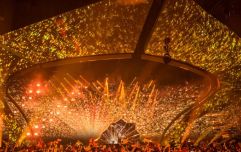 Eurovision 2020 has officially been cancelled

END_OF_DOCUMENT_TOKEN_TO_BE_REPLACED

She carried on despite the interruption and you can relive it here.

It appears that SuRie wasn't too disheartened by it all, at least. Following her performance, the 29-year-old tweeted: "Well, I've always said anything can happen at Eurovision ..."

She added, via The Mirror: "I'm so proud of my performance tonight. I gave it my very best.

"It's been an incredible experience for me. I am so grateful for everyone's love and support. The fans make Eurovision what it is; the biggest and the most inclusive and open celebration of music in the world.

"Eurovision is a family, and I am proud to be part of it."

The man was taken into police custody following the disruption. The European Broadcasting Union issued a statement following the incident.

"The EBU regrets a stage invasion took place during the UK performance. The person responsible is currently in police custody," it read.

"The UK singer SuRie and her team were offered the option to sing again but decided not to because they were extremely proud of her performance and have decided that there is absolutely no reason to perform the song again."

House of Rugby Ireland · Quinn Roux on finding a home in Ireland and Mike McCarthy brings the absolute HEAT!
popular
Joe Exotic fails to receive pardon from US president Donald Trump
Government abandons plans to reopen schools for children with special educational needs
Joe Exotic has limo waiting as he expects presidential pardon from Donald Trump
Joe Biden quotes James Joyce in farewell speech in Delaware
Irish punters could turn €0.98 into hundreds of millions* with a bet on the Super Jackpot
5 upcoming movies about the end of the world
QUIZ: Can you name all the teams in the NBA from their locations?
You may also like
8 months ago
WATCH: The first track from Will Ferrell's Eurovision movie has been released
9 months ago
QUIZ: How well do you remember Ireland's Eurovision entries?
1 year ago
Ireland are looking for youngsters to represent us at Junior Eurovision
1 year ago
Will Ferrell's Eurovision movie will star Pierce Brosnan as "the most handsome man in Iceland"
1 year ago
UK's last-placed Eurovision entry has points tally lowered after contest
1 year ago
WATCH: 25 years later, the power of Riverdance feels as strong as ever
Next Page