Video: You’ll want to have a listen to the Rubberbandits’ latest effort, a song all about Boyzone

Two of Ireland’s greatest ever musical acts, together at last, although that's not entirely true interestingly enough…

When the Rubberbandits make music, people want to listen, such is their reputation as the best plastic-bag-over-the-head-wearing band in Ireland and, arguably, the world.

END_OF_DOCUMENT_TOKEN_TO_BE_REPLACED

Following on from previous hits such as ‘Black Man’, ‘Hey Mister’ and the phenomenally successful ‘Horse Outside,’ the Limerick lads debuted their latest hit on Republic of Telly this evening, a song all about the greatest Irish boy band since the Carter Twins.

In the song, the Rubberbandits suggest a new career direction for their musical contemporaries and, in all honesty, who can argue with the sentiments behind lyrics such as “Bring Daniel Day Lewis on stage/and then fart in his face/and tape it when it comes on the news”.

Although this isn’t a collaboration as such, the Rubberbandits and Boyzone have performed together before, in Edinburgh on Paddy’s Day, when they joined Shane Lynch on Keith Duffy for the most unlikely Irish rap-off in history. 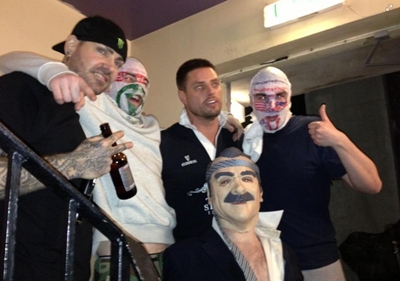 Video via YouTube/RTE Republic of Comedy