Adolf Hitler's toilet is for sale in New Jersey

A garage in New Jersey has somehow ended up in possession of one of Adolf Hitler's toilets, which had previously been installed on his luxury yacht the Aviso Girlle, which was also the state yacht of Germany when Hitler was the leader of the country.

Greg Kohfeldt, who runs the auto repair shop in Burlington County where the antique ended up, told The Daily Mail that he had been invited on TV to sell the piece, which has gotten him and his piece of porcelain some media attention.

END_OF_DOCUMENT_TOKEN_TO_BE_REPLACED 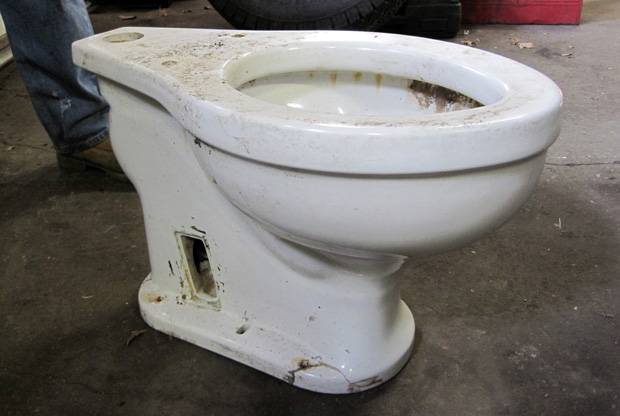 No word on how much the toilet would cost, but Greg believes that the right offer could get him to part with the loo-t, which was found in a scrapyard in 1951 by the previous owner of the garage, who installed it in the repair shop.

Greg and his other employees have been using it for a few years, so it might require a bit of a clean up.

popular
Status Orange thunderstorm warning issued for 14 counties
Disney+ has just added 10 big movies to its library
New Garda uniform to be rolled out on Monday
QUIZ: You'll do well to get 100% in this General Knowledge Quiz
Marty Whelan "strangely flattered" by tattoo resulting from Fantasy Football forfeit
QUIZ: Match The Simpsons quote to the character who said it
Gardaí urge public not to share "upsetting" pictures of fatal assault of Paul 'Babs' Connolly in Westmeath
You may also like
2 days ago
WATCH: Flight makes scary 'lowest ever landing' at Greek airport, narrowly avoiding plane spotters
3 days ago
Actress Anne Heche "not expected" to survive coma following car crash
5 days ago
Ryanair expects "zero disruptions" from strikes by Spanish cabin crew unions
1 week ago
Archie Battersbee dies aged 12 as life support is withdrawn
1 week ago
Actress Anne Heche reportedly in critical condition after fiery car crash
1 week ago
Too little too late for sorry Alex Jones as he's hit with $4 million bill over Sandy Hook conspiracy claims
Next Page