'We appreciate the offer, but maybe those resources are more relevant to reforest Europe.'

On Monday, the leaders at the G7 summit offered $20 million (approximately €18 million) to help fight the fires currently raging in the Amazon rainforest.

The majority of this was to be spent on fire-fighting aircraft, but the immediate response online by the general public was the the amount was almost entirely insignificant. 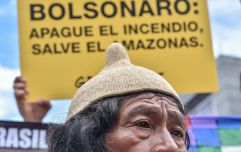 END_OF_DOCUMENT_TOKEN_TO_BE_REPLACED

Initially, Brazilian environment Minister Ricardo Salles had said they welcomed the offer, but after a meeting with Bolsonaro and his ministers, the Brazilian government announced a change of course.

"We appreciate (the offer), but maybe those resources are more relevant to reforest Europe. Macron cannot even avoid a foreseeable fire in a church that is a world heritage site. What does he intend to teach our country?" said Lorenzoni.

"Brazil is a democratic, free nation that never had colonialist and imperialist practices, as perhaps is the objective of the Frenchman Macron."

The chief of staff also told Macron that he should take care of "his home and his colonies."

popular
Man in his 50s dies following fatal assault in Kerry
Coleen Rooney 'confident she's won' Wagatha Christie trial against Rebekah Vardy, according to reports
Met Éireann issue warning for potato blight this week
The JOE Movie Quiz: Week 155
Tory MP facing drink spiking claims as one fellow politician woke up to find 'nipples being licked'
QUIZ: If you get 15/15 in this General Knowledge quiz, give yourself a pat on the back
Belgium becomes first nation to introduce compulsory monkeypox quarantine
You may also like
6 months ago
Galway castle makes list of weirdest Airbnbs in the world
1 year ago
Watch the official trailer for Netflix's hotly anticipated Pelé documentary
2 years ago
Brazil's President seems to accuse Leonardo DiCaprio of starting the Amazon fires
2 years ago
Gold miners invade indigenous village in Brazil following death of leader
4 days ago
Dáil passes motion to secure public ownership of National Maternity Hospital site
4 days ago
Gardaí investigating firearm being discharged near film set in Donegal
Next Page