Merkel has since recovered from the incident.

Chancellor of Germany Angela Merkel has said that she is fine after cameras captured her suffering a nasty shaking episode while present at a Berlin ceremony earlier today.

Merkel, who is 64, could be seen on video shaking quite violently as she stood next to Ukrainian President Volodymyr Zelensky, who is making a state visit to Germany. 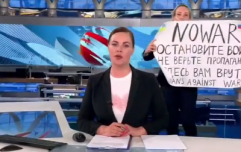 END_OF_DOCUMENT_TOKEN_TO_BE_REPLACED

The shaking eventually subsided, and Merkel went on to give a joint press conference with the Ukrainian leader, at which she addressed the incident.

"Since then I've drunk at least three glasses of water, which I apparently needed, and now I'm doing very well," she said. Berlin is currently going through heatwave temperatures, and the heat at the time was approaching 30 degrees.

Video from the scene shows Merkel enduring a rather intense bout of shaking.

Merkel has been Chancellor of Germany since 2005. She will stand down at the end of her current term, which will expire in 2021.

popular
Jeffrey Dahmer’s dad thinks he knows what’s to blame for son becoming a serial killer
€600 energy credits and free schoolbooks for children set to be announced in Budget 2023
QUIZ: Test your knowledge with this Ultimate Friends Character Quiz
QUIZ: Name the country for each of these non-capital cities
House Of The Dragon is already better than Game Of Thrones
Amazon Prime Video has just added 20 very big movies to its library
Fine Gael Councillor slams attendees of cost of living crisis protests
You may also like
9 months ago
Several people injured in Germany after old aircraft bomb explodes
1 year ago
France to outlaw shredding and gassing of male chicks by 2022
2 years ago
Bodies of five children found in German apartment
2 years ago
Germany bans gatherings of more than two people
2 years ago
Hash cake accidentally served at German funeral
2 years ago
Two dead following shooting near German synagogue
Next Page