Since Ireland voted to repeal the Eighth Amendment in a referendum last month, pressure has been mounting for Northern Ireland to change its restrictive abortion laws.

Unlike the Republic of Ireland, Northern Ireland will not need to have a referendum on the matter — which can be decided by their Assembly. However, the Assembly has been suspended since early 2017, as parties in the North struggle to come to a power-sharing agreement.

Speaking to Sky News, Arlene Foster has said that the DUP would become more popular as a result of Sinn Féin's increasingly liberal stance on abortion. 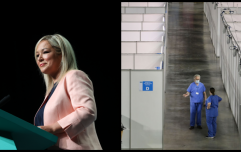 END_OF_DOCUMENT_TOKEN_TO_BE_REPLACED

Foster claims she has heard from many voters "who feel so very strongly about this issue that they will cast their vote on that basis".

"I have had emails from Nationalists and Republicans in Northern Ireland not quite believing what is going on and saying they will be voting for the DUP because they believe we are the only party that supports the unborn."

Foster also had harsh words for the reactions of many Irish people to last weekend's referendum result: "It certainly does not deserve some of the antics that we've seen recently frankly and I did find it, I have to say, quite distasteful to see people dancing about on the streets in relation to the referendum result."

popular
The JOE Friday Pub Quiz: Week 272
One of the best Irish movies ever made has just been added to Netflix
Here's the lineup for tonight's Graham Norton Show
One of Keanu Reeves' best movies has just been added to Netflix
Man hospitalised after suspected shooting incident in Tallaght
Ireland set for colder weather with temperatures to drop to minus figures
NPHET considers more restrictions including on hospitality and home visits
You may also like
1 month ago
"I want to lead as Taoiseach if you give us that chance," Mary Lou McDonald says
1 month ago
Nearly a third of young people intend to emigrate in the next 12 months, new survey reveals
1 month ago
Gun violence threat made to Sinn Féin TD Martin Kenny's office
1 month ago
Sinn Féin hits out at "out of touch" Government over "con job" Budget
1 month ago
Pearse Doherty says President Higgins was "absolutely right" not to attend centenary
1 month ago
New opinion poll shows Sinn Féin in 10-point lead as most popular party
Next Page