Boeing 737 skids into river after attempting to land during thunderstorm

All 136 passengers and seven crew members were OK.

A Boeing 737 plane flying into Florida skidded off the runway as it attempted to land during a thunderstorm.

The plane ended up in the St. Johns River but thankfully, the plane was not submerged.

The Jacksonville Sheriff's office confirmed that there were no casualties and all 136 passengers and seven crew members were safely removed from the aircraft.

21 people were transported to hospitals and they're in good health, according to Officer Tom Francis of Jacksonville Fire Rescue.

#JSO Marine Unit was called to assist @NASJax_ in reference to a commercial airplane in shallow water. The plane was not submerged. Every person is alive and accounted for. pic.twitter.com/4n1Fyu5nTS 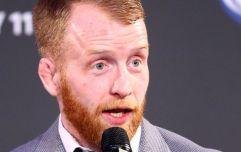 END_OF_DOCUMENT_TOKEN_TO_BE_REPLACED

Captain Michael Connor, the commanding officer of NAS Jacksonville, said during a press conference that the passengers were a mix of civilian and military personnel flying from the Guantanamo Bay military station in Cuba.

He acknowledged that the crash could have ended much worse for those on board.

"I think it is a miracle," he said. "We could be talking about a different story this evening."

Passenger Cheryl Bormann told CNN that the plane flew through lightning and thunderstorms on the way to Jacksonville before it tried to land. She also described how "the plane bounced and screeched and bounced some more" before it came to a "complete crash stop" in the river.


popular
The JOE Friday Pub Quiz: Week 174
Paddy Holohan has been suspended from Sinn Féin over his claims that "scum" underage girls were having sex with men and blackmailing them
Paddy Holohan has been suspended from Sinn Féin with immediate effect
QUIZ: How many of these Disney Channel TV shows can you name?
Leo Varadkar hurries away from questions about "corporations and parasite landlords" on campaign trail
Met Éireann has issued an ice and low temperature warning for 17 counties
Two people shot in North Dublin
You may also like
2 days ago
Met Éireann issues four separate weather warnings affecting eight counties
2 days ago
Tent of seriously injured homeless man "placed in a precarious and dangerous location," say Dublin City Council
2 days ago
Lots of Irish chippers are offering €5 meal deals today in aid of Pieta House
4 days ago
Storm Brendan: Status Orange warning remains in place for five counties, downgraded to Status Yellow for nine counties
4 days ago
Road Safety Authority issue advice to motorists as Storm Brendan reaches Ireland
4 days ago
Man injured after shooting incident in Dublin
Next Page