Human remains have been found.

The FBI has confirmed they found human remains in a Florida park on Wednesday in the search for Gabby Petito's missing fiance Brian Laundrie.

Steven Bertolino, the Laundrie family's lawyer, has said that there is a "strong probability" that the remains found belong to the 23-year-old. 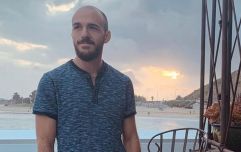 END_OF_DOCUMENT_TOKEN_TO_BE_REPLACED

Speaking with CNN, he said: "The probability is strong that it is Brian’s remains, but we’re going to wait for the forensic results to come in and verify that."

The remains were found in the Myakkahatchee Creek Environmental Park in Florida near a backpack and a notebook thought to belong to Laundrie.

Initial reports suggest Laundrie's father Chris found a "dry bag" which belonged to his son in the Carlton Reserve in Florida.

An unidentified source has also told CNN that the partial remains "seem to have been there for a while".

They report that "based on the condition of the remains, it may take some time to officially identify. It is going to be a very thorough process with the medical examiner."

Laundrie was reported missing by his parents on 17 September, and remains a "person of interest" in the investigation of Petito's death.

Dog the Bounty Hunter, who sensationally joined the search for Laundrie to much media attention, has claimed that the search for Petito's fiance "seems to be over".

Gabby Petito's death is currently being treated as a homicide.

popular
These are the most generous counties in Ireland, according to GoFundMe
More counties issued with weather warnings as Storm Barra hits Ireland
Schools affected by Storm Barra expected to reopen tomorrow, says Minister
Woman in her 30s injured after falling from balcony in Cork city
"Absolutely no follow-up" on contact tracing in nightclubs and live venues
Woman in her 90s dies following road crash in Clare
An underseen Keanu Reeves adventure is among the movies on TV tonight
You may also like
2 months ago
Gabby Petito disappearance: FBI confirm remains found are that of missing woman
2 days ago
An Post has created two new stamps to commemorate 100 years since the Treaty
2 days ago
Status Yellow warning for every county as Storm Barra set to hit this week
2 days ago
Irish passengers won't need negative Covid test to enter UK
3 days ago
Number of Covid hospitalisations falls to lowest level in four weeks as Tánaiste says "plan is working"
3 days ago
Teenage girl seriously injured after collision between scooter and van in Dublin
Next Page