"The Pope needs to do more than apologise."

Wendell Pierce, best known for playing William 'Bunk' Moreland in The Wire, has criticised Pope Francis upon the leader of the Catholic Church's visit to Ireland.

Pope Francis touched down in Dublin on Saturday morning - not England, as Sky News declared - before signing the visitors' book in Áras an Uachtarain. 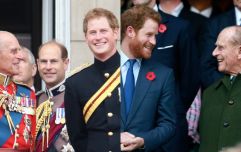 END_OF_DOCUMENT_TOKEN_TO_BE_REPLACED

A busy day has already seen the Pontifex press the flesh with adoring fans on the streets of Dublin and come under heavy criticism from Colm O'Gorman, who challenged Pope Francis following his initial address.

O'Gorman wasn't the first to demand more action from The Pope, as a somewhat unlikely critic has emerged.

Taking to Twitter in advance of the Papal visit, Wendell Pierce offered his two cents.

"In light of the disturbing revelations of the abuse in Pennsylvania and all over the world," wrote the actor.

"The Pope needs to do more than apologise," Piece continued.

"He should call for the prosecution of all the criminal priests."

Today @Pontifex PopeFrancis is visiting Ireland & will meet with sexual abuse victims. In light of the disturbing revelations of the abuse in Pennsylvania & all over the world, the Pope needs to do more than apologize.He should call for the prosecution of all the criminal priests

Pierce, of course, already has a decent reason to keep an eye on Ireland, given his die-hard support to St. Patrick's Athletic:

And it seems that Bunk and prominent Irish politicians are roughly on the same page when it comes to The Pope.

END_OF_DOCUMENT_TOKEN_TO_BE_REPLACED

Speaking at Dublin Castle on Saturday, Fianna Fáil's Michaél Martin told RTÉ News that he would appreciate "a greater focus on the actions that should follow" in the wake of the Pope's words.

"I think he was quite clear in his condemnation of the failings of the church in terms of abuse of children by church members," said Martin.

"But I do think there needs to be follow-through in terms of who was responsible for the various cover-ups, for the policies of shifting the abusers to different parishes and locations where the abuse continued. It has to be completely open and frank."

Before that, Leo Varadkar expressed a similar sentiment as the Taoiseach called on Pope Francis to use his office and influence to ensure that abuse survivors get "justice, truth and healing".

popular
Beware of the very clever WhatsApp hack that is locking Irish users out of their accounts
The 50 most iconic songs of all time* have been revealed
Making A Murderer: The explosive and NSFW telephone call that implicates a new killer
Reeling in the Years was watched by over half a million people last night
People think they've figured out the ranking of the viewers on your Instagram Stories
Motor insurance costs set to fall from June after changes to payout guidelines
PICS: The man with the biggest penis in the world has one unbelievable problem with it
You may also like
3 days ago
UK government to introduce 'traffic light system' for holidays abroad
5 days ago
EMA says blood clots should be listed as "very rare" side effect of AstraZeneca jab
1 week ago
Everyone in England to be offered two rapid weekly Covid tests
1 week ago
Policeman resigns over video of him choking police dog (Warning: Graphic content)
1 week ago
EMA ongoing review finds no specific age risk for AstraZeneca Covid-19 vaccine
1 week ago
RTÉ journalist forced to flee China due to threats towards her husband and family
Next Page