Cahersiveen: a tale of two letters

Some of the most famous stories are written in what is known as epistolary writing, where the narrative unfolds through a series of letters. Bram Stoker's Dracula is a well-known example, or the more modern The Perks of Being a Wallflower. Ireland's failure of Direct Provision residents under international and European law during this crisis is being told in a similar style.

A letter from the local HSE Department of Public health department to residents of a Direct Provision Centre in Cahersiveen a few weeks ago blamed them for the continued spread of the virus in the Skellig Star Hotel. This morning, Minister for Justice and Equality Charlie Flanagan published an open letter in The Kerryman, apologising to residents of Cahersiveen.

END_OF_DOCUMENT_TOKEN_TO_BE_REPLACED

The difference in tone of these two letters tell a lot about Ireland’s treatment of Direct Provision residents during the Covid-19 crisis.

One is repentant, apologetic, explanatory. It does not hide from the relevant Department’s failings. It throws its hands up and says ‘look, we got this wrong. These are unprecedented times and we got it wrong and we’re sorry’.

That letter came after weeks of revelations around the Skellig Star Hotel temporary Direct Provision Centre in Cahersiveen, and a significant Covid-19 cluster outbreak that has seen residents locked down for almost a month. The apology was welcome, it just didn’t address everyone it needed to.

This letter was an apology to the residents of Cahersiveen, and no one else. Minister Flanagan said in his letter; “So we moved people in within days. It was fast. I admit that. It left little or no time for engagement. I admit that.

“It was presented as a fait accompli. I admit that too. All I can say in my Department’s defence is we simply did not feel we had a choice.”

Community engagement on these issues is vital, and residents of Cahersiveen should have been informed and properly engaged with, even giving the extreme circumstances. But that short notice applies also to the Direct Provision residents who were moved from centres in Dublin to Cahersiveen with 24-hours notice. Some lost jobs. None had a choice.

This fast movement of Direct Provision residents has also been criticised, as some came from a hotel where a confirmed case of Covid-19 was present. It is reported that no testing took place prior to moving these residents. Minister Flanagan said in the Dáil last week that neither he nor his Department were aware of this case until fellow TD Catherine Murphy raised it with his office. The HSE have not yet responded to multiple contacts from JOE.

The letter issued to Cahersiveen Direct Provision residents last Friday was from the local Department of Public Health, the HSE has confirmed.@JOEdotie pic.twitter.com/7yv7lWGdPA

END_OF_DOCUMENT_TOKEN_TO_BE_REPLACED

The other letter was distributed to residents of the Skellig Star Hotel almost three weeks ago. It told them that their lockdown was being extended by a further two weeks because another positive case had been confirmed. It said that “this is clear evidence that some residents are not following the Public Health recommendations”. They were to blame for its continued spread. They weren’t doing what they were told, because they couldn’t do it.

This letter was eventually confirmed to have come from the local Department of Public Health, after multiple queries were raised by JOE to the HSE. Speaking before the Oireachtas Special Committee on Covid-19 Response on Tuesday, HSE CEO Paul Reid said numerous times that in regards to Direct Provision Centres, the HSE provide public health advice and it is up to the centres to implement these (with help and guidance from the HSE).

It raises the question; what happens if Centres are privately owned? What if centres simply cannot provide the correct facilities needed? I raised this question at the Department of Health briefing on Tuesday evening, and Dr Colm Henry of the HSE said there has been no issue in implementing public health advice in Direct Provision centres;

END_OF_DOCUMENT_TOKEN_TO_BE_REPLACED

"It is important to distinguish those outbreaks where we have direct control, such as HSE facilities, which are primarily in health, whereas Direct Provision, as you know, they're run by the Department of Justice. But it's important to reassure people that in the outbreaks, especially as we go along, we are working very closely with the Department of Justice and these Direct Provision centres are under their direct governance."

Dr Henry also told JOE that they have not been in a situation where they have had to enforce the public health advice in a Direct Provision Centre;

"We prefer to work with people rather than have to enforce things. I'm happy to say that in the management of Direct Provision Centres, there's a very good working relationship now with the Department of Justice in managing the outbreaks and in some cases in finding alternative accommodation, isolation for people.

"So we haven't had to be in a situation where we've had to enforce our will upon a reluctant sector such as the Department of Justice, that hasn't been the case." 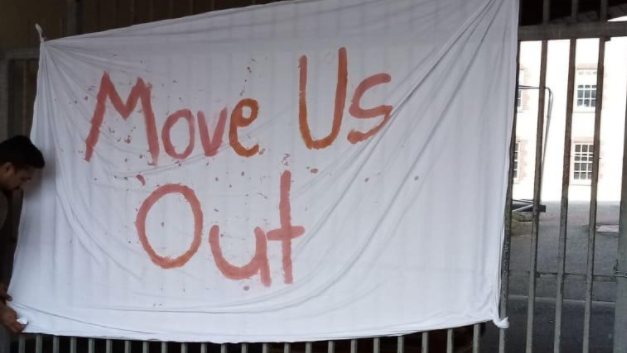 But that simply does not tally with the reports JOE and other media outlets have had from residents in the Skellig Star Hotel. To date, we have heard of residents moving in without a working boiler, residents unable to eat in their rooms and having to eat in communal settings, locks being placed on the gates of the hotel to prevent residents from leaving and claims that the first confirmed case of Covid-19 in the centre was not isolated properly initially and was left to the care of their roommate.

As Movement of Asylum Seekers Ireland (MASI) said in a statement on 11 April about public health measures implemented in Direct Provision centres; “Putting a sticker on the floor in a tiny kitchen shared by 19 men who also have to share bedrooms and use communal toilets does not give asylum seekers assurance that they are protected.”

It is hard, reading these two letters side by side and seeing the manner in which they have been treated during this crisis, to not believe that Direct Provision residents have fallen between the cracks of the multiple groups responsible for their care during a pandemic. Time after time when investigating issues relating to Cahersiveen and other centres, we have been batted from Department to Department in a manner akin to Forrest Gump’s table tennis practice.

Dr Michael Ryan of WHO said as far back as 13 March that "We cannot forget migrants, we cannot forget undocumented workers, we cannot forget prisoners... the only way to beat (Covid-19) is to leave no one behind... we are in this together". Leo Varadkar also told us on St. Patrick's Day that "we are all in this together", while on 4 April Minister for Health Simon Harris echoed Dr Ryan as well; “It is vital we leave nobody behind as we navigate our way out of this pandemic.”

Direct Provision residents have been left behind by the Irish state so many times to date; this tale of two letters adds yet another layer to that failure on a legal, moral and human level.

popular
New powers to allow Gardaí request the passcode for smartphones
Matt LeBlanc has seen the memes of him as every Irish auld lad and very much enjoyed them
It's official, these are the sunniest counties in Ireland
QUIZ: Can you name all of these counties from their nicknames?
The JOE Movie Quiz: Week 106
QUIZ: Take on this tasty challenge of your General Knowledge skills
QUIZ: You won't be able to guess all these brands from their slogans
You may also like
2 days ago
319 new cases of Covid-19 have been reported in Ireland
2 days ago
Van Morrison leads anti-Robin Swann chant after concerts postponed
3 days ago
Covid-19 patients in ICU in Ireland at its lowest level this year
3 days ago
398 new cases of Covid-19 in Ireland as St James's reports no patients with the virus
4 days ago
One million Irish people set to be fully vaccinated against Covid-19 by the end of today
4 days ago
30-39 age group to be allowed register for Covid-19 vaccine from next week
Next Page