The move comes after comments made by George Hook on the subject of rape on Friday.

Dalata, the hotel group that sponsors George Hook's High Noon show on Newstalk, says it will cancel its agreement with the station in the wake of Hook's comments on rape on Friday.

Both Hook and Newstalk have apologised for the remarks, in which he attached blame to the victim of an alleged rape in the United Kingdom. JOE published this piece in response on Friday evening. 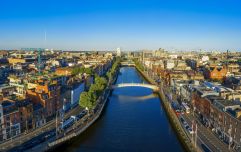 END_OF_DOCUMENT_TOKEN_TO_BE_REPLACED

Dalata chief executive Pat McCann said on Sunday night that his company would no longer work with the Dublin-based radio station.

“We will be attempting to end our commercial relationship with Newstalk first thing in the morning. We can’t be associated with either a presenter or a station that allows those kind of comments," he stated.

In his broadcast on Friday, Hook asked a number of questions that suggested the girl at the centre of the allegations was responsible for the events that unfolded.

“Why does a girl who just meets a fella in a bar go back to a hotel room?" he asked.

“Should she be raped? Of course she shouldn’t. Isn’t she entitled to say no? Of course she is. Is the guy who came in a scumbag? Certainly. Should he go to jail? Of course. All those things."

He then asked the question at the very centre of the controversy, with the Dublin Rape Crisis commenting that questions such as the following could lead to under-reporting of sexual assaults to the authorities.

1,345 new Covid-19 cases reported as public called on to "turn the tide" on the Delta wave

END_OF_DOCUMENT_TOKEN_TO_BE_REPLACED

“But is there no blame now to the person who puts themselves in danger?" asked Hook.

Noeline Blackwell, chief executive of the Dublin Rape Crisis Centre, told the Irish Times: “When someone is raped the only person responsible is the rapist.”

popular
The JOE Friday Pub Quiz: Week 253
Large crowds gather in Dublin to protest against vaccines and Covid certs
One of the best comedies of the last five years is among the movies on TV tonight
Draft guidelines published for the return of indoor hospitality on Monday
The JOE Music Quiz: Week 67
Horror film Old has one of the scariest scenes you’ll see this year
QUIZ: Test your smarts with this general knowledge quiz
You may also like
6 hours ago
Temperatures to reach 28 degrees this weekend as conditions set to cool next week
7 hours ago
Restaurants chief says "fake bookings" being made in protest of indoor hospitality rules is "a huge issue"
9 hours ago
Garda patrol car struck by gun shot in Tallaght overnight
9 hours ago
Draft guidelines published for the return of indoor hospitality on Monday
22 hours ago
Man in 60s dies at Dollymount Strand as number of swimming-related deaths this week rises to six
1 day ago
SuperValu recalling bakery products from four stores over the potential presence of a metal piece
Next Page