RTÉ News presenters David McCullagh and Eileen Dunne both issued on-air apologies on Friday evening for their attendance at a retirement function on the RTÉ campus last week.

Photographs of a gathering to mark the retirement of RTÉ staff member Phil Collins appeared in The Irish Sun on Friday morning, in which McCullagh, Dunne and other high-profile RTÉ staff members such as Miriam O'Callaghan and Bryan Dobson could be seen not wearing masks and not observing social distancing guidelines.

END_OF_DOCUMENT_TOKEN_TO_BE_REPLACED

RTÉ apologised for the incident on Friday, as did a number of staff members in individual statements.

Speaking to Virgin Media News on Friday, Taoiseach Micheál Martin described the photos as “very disappointing”, while RTÉ has promised a review of all of the circumstances that led to the gathering in an effort to ensure that such an incident doesn’t happen again.

As one of the main news stories of the day on Friday, RTÉ addressed the issue head-on in both the Six One and Nine O’Clock news on Friday evening, presented by David McCullagh and Eileen Dunne respectively.

Speaking on the Six One news, McCullagh said: “Now, as you saw in Fergal’s report, I am one of the people who unfortunately failed to properly observe social distancing here in RTÉ last week.

“It was an error of judgement which I deeply regret, for which I take full responsibility and for which I unreservedly apologise to you, our audience.

“None of us can afford to let down our guard, even for a moment, and I am very, very sorry that I failed to do the right thing on this occasion.” 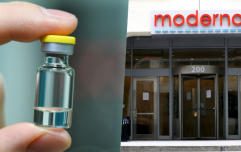 END_OF_DOCUMENT_TOKEN_TO_BE_REPLACED

On the Nine O’Clock News later in the evening, Eileen Dunne said: “So hands up, as you’ve seen, I too was photographed at the farewell for Phil and I’d like to take this opportunity to apologise for my lack of judgement, particularly to RTÉ colleagues who’ve worked so hard to keep this campus Covid-free over the past eight months.

RTÉ Newscaster Eileen Dunne apologises for being present at a gathering last week, where social distancing was not fully observed | More: https://t.co/YnWpsn4SGn pic.twitter.com/ezrM3KUKvA

popular
The JOE Movie Quiz: Week 80
QUIZ: Can you guess these European countries from their outlines?
Record Christmas bonuses worth €390 million to be paid to 1.6 million recipients next week
Liam Neeson to narrate landmark two-part series marking the 175th anniversary of the Great Famine
Listen carefully, Tubs says he didn't use the F-bomb on live TV... as Toy Show Appeal donations top €6.4million
Video: So what exactly did John Terry say to Anton Ferdinand?
Moderna vaccine trial shows 100% efficacy in dealing with severe Covid-19 infections
You may also like
3 days ago
Publicans say government “can’t hide behind NPHET” over decision to keep wet pubs closed
3 days ago
Reopening of restaurants and gastropubs, travel between counties set to be approved by government
4 days ago
NPHET strongly opposed to some parts of Government plans to exit lockdown next week
5 days ago
Irish publicans feel “demonised” by government leaks, accuse NPHET of having “anti-pub agenda”
6 days ago
"Don't pass the gravy boat" this Christmas, says expert immunologist
1 week ago
One new Covid-19 related death and 318 new cases confirmed in Ireland
Next Page