On Friday afternoon, several thousand people affected by the Mica scandal in Donegal took to the streets of Dublin in order to demand a 100% redress compensation scheme from the Government.

Householders affected from Donegal, Mayo and other counties, whose properties are crumbling due to the use of defective concrete blocks, gathered at the Garden of Remembrance in Parnell Square for the major protest.

From there, campaigners marched down O'Connell Street to the Department of Housing's head office on Custom House Quay.

Organiser of the protest, Paddy Diver, urged the government to end the "torture" and "fix the homes". 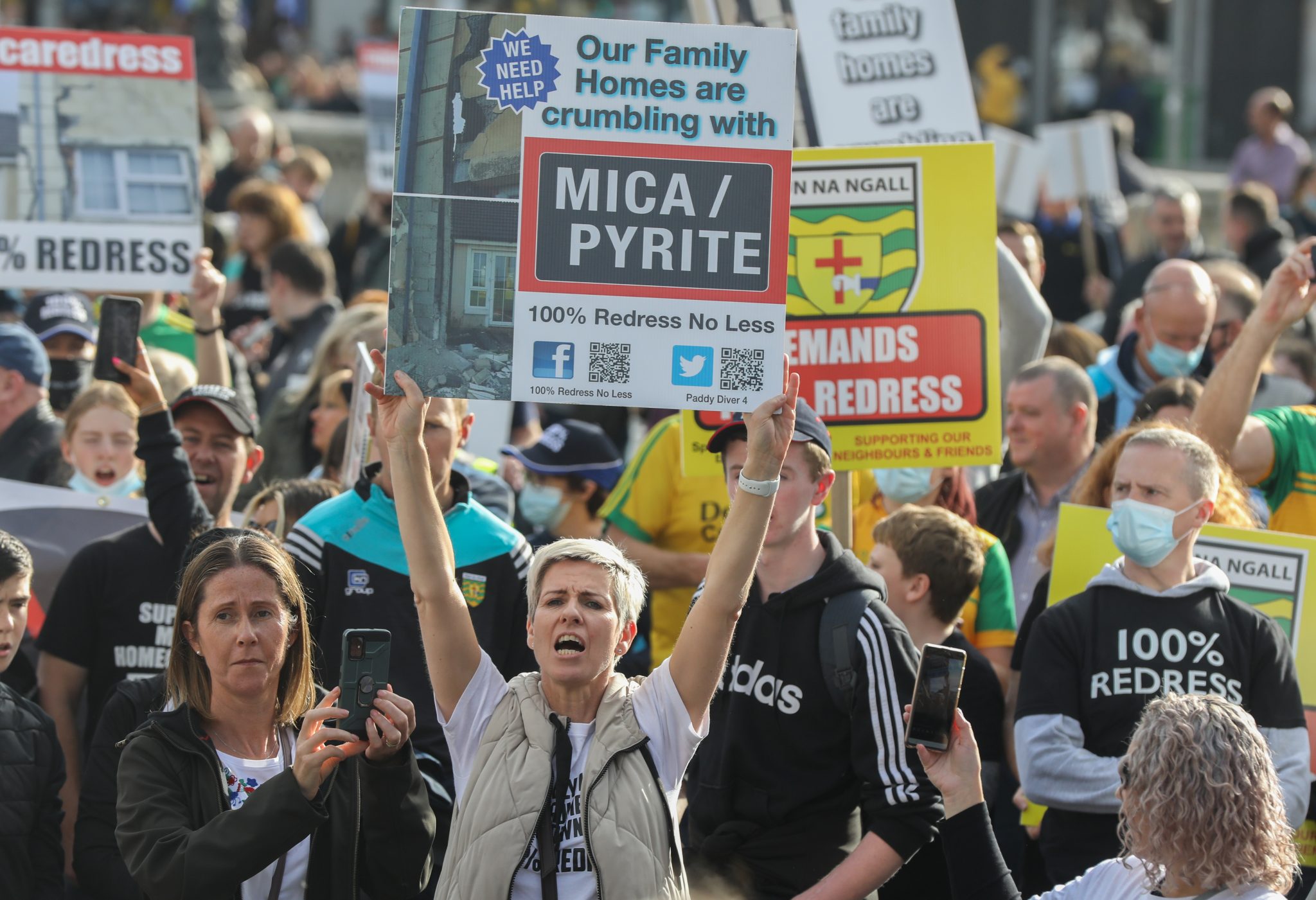 Several individuals affected by the scandal subsequently appeared on Friday night's edition of The Late Late Show, including Professor Paul Dunlop of Ulster University who called on the government to take urgent action.

Asked by host Ryan Tubridy about the potential impact on the taxpayer, Dunlop responded:

"I never ever thought that I would be on the streets campaigning to ask the government to pay for my home, ever.

END_OF_DOCUMENT_TOKEN_TO_BE_REPLACED

"I went to university for eight years, studied for a degree, got a PhD, came back on an academic job and kept myself going – and everyone else is the same. The bottom line, for me, is this – what is unfolding in Donegal is a humanitarian crisis. It's not a financial crisis.

"We don't particularly want to go and ask the government to pay for this but the bottom line is that the failure of regulation – the buck stops with them. As it stands at the minute, nothing has changed in terms of regulations."

Dunlop then addressed the Minister for Housing and the government's much-mooted Housing For All plan.

"Darragh O'Brien's big housing plan for all that was announced a few weeks ago; big projections to build 30-odd thousand homes in Dublin – there is nothing to stop defective blocks getting into the market there to build those homes," he warned.

"So we're here to campaign to stop that practice and we're also here to campaign for the government to look at its Irish citizens and do what is right for its people. Its primary role is to look after us. They looked after the banks during the banking crisis and bailed them out of €64 billion and it didn't cost them a drop of a hat so it's time to step up and look after its citizens.

"If it cost three billion, then so what? Let it be a learning lesson for the government because they need to regulate so this doesn't happen ever again," Dunlop concluded.

popular
One of the best Irish movies ever made has just been added to Netflix
New airline to provide low-cost flights from Ireland to Iceland
Ireland starting to see stabilisation in indicators for Covid incidence, says CMO
A woman has died and several injured after fatal Kilkenny crash
One of 2021's most overlooked movies and 7 more movies and shows to watch this week
Here's the line-up for this week's episode of The Late Late Show
Here are all the movies on RTÉ this Christmas
You may also like
23 hours ago
"Far too early" to conclude Omicron variant is milder than Delta, says CMO
1 day ago
Taoiseach 'not entirely comfortable' with children wearing masks in school
1 day ago
First case of Omicron variant in Ireland officially detected by NPHET
1 day ago
No child should be excluded from school for not wearing a mask, says charity
1 day ago
Stephen Donnelly defends new travel rules, calls Ryanair's comments "odd"
1 day ago
Man arrested after shots fired at Garda patrol car
Next Page