Thousands affected by the Mica scandal march through Dublin

The protest's organiser called on the government to end the "torture" and fix the homes.

Several thousands of people affected by the Mica scandal marched through Dublin on Friday afternoon (8 October) in order to demand a 100% redress compensation scheme from the government.

Householders affected, from Donegal, Mayo and other counties, whose properties are crumbling due to the use of defective concrete blocks, gathered at The Garden of Remembrance in Parnell Square in Dublin city at midday for the major protest.

From there, campaigners then marched down O'Connell Street to the Department of Housing's head office on Custom House Quay.

Organiser of the protest Paddy Diver called on the government to end the "torture" and "fix the homes". 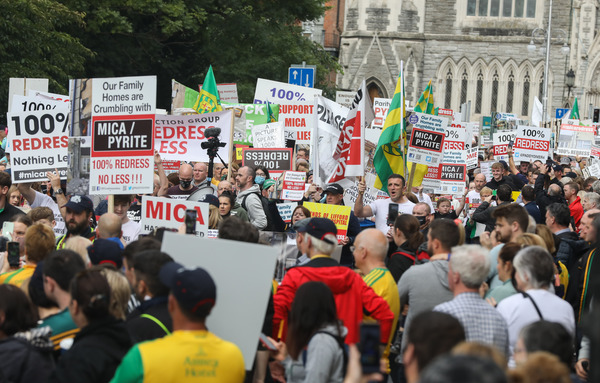 END_OF_DOCUMENT_TOKEN_TO_BE_REPLACED

"The message is we can't wait no longer. We're not looking forward to Christmas," he told Virgin Media News.

"We're coming down here to say, end this torture. Fix the homes. It's not our fault."

The government is expected to make an announcement regarding the redress scheme in the coming weeks.

popular
The "eighth best movie ever made" is among the movies on TV tonight
Mia Khalifa claims seaside town is better than Miami
Jennifer Lawrence sparks controversy by saying she was the first woman to lead an action movie
The 50 most iconic songs of all time* have been revealed
The start of the superhero takeover of Hollywood is among the movies on TV tonight
One of the best films of all time is among the movies on TV tonight
Met Éireann updates weather warning for entire country as temperatures set to fall to -6
You may also like
3 days ago
Woman hit by rollercoaster is trapped in own body after finally awaking from coma
3 days ago
Woman arrested in connection with dog attack in Wexford that left child seriously injured
3 days ago
We could be getting snow this Thursday, according to Met Éireann
4 days ago
Ireland sees '100% success rating' with four-day work week trial
4 days ago
Winter warning issued as "severe" week of cold weather in store for Ireland
6 days ago
Temperatures set to drop to freezing this weekend as Christmas predictions emerge
Next Page