€500,000 worth of cocaine and firearms found during Covid-19 checkpoint search

Not quite the purpose of the checkpoints, but okay.

Gardaí discovered half a million euro worth of cocaine when they attempted to stop a car during a Covid-19 check on Tuesday morning (14 April).

According to a statement from An Garda Síochána, the vehicle took off at speed, resulting in a car chase. The incident occurred at 4.30am on Phibsboro Road in Dublin. 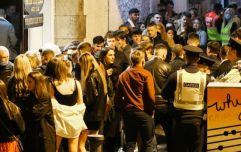 END_OF_DOCUMENT_TOKEN_TO_BE_REPLACED

The car eventually crashed into a wall at Essex Quay, and one of the passengers was seen throwing an item into the Liffey. After a search, two handguns were retrieved from the river.

A search of the vehicle was conducted and 8kg of suspected cocaine, with an approximate street value of €500,000, and a small amount of suspected cannabis herb was seized. All drugs have been sent for analysis.

Two men and one woman were arrested at the scene and are currently detained in Kevin Street, Kilmainham and Pearse Street Garda Stations. Investigations are ongoing.

The Big Reviewski || JOE · The Big Reviewski with Dune, a mini-Hangover reunion & the best of Timothée Chalamet
popular
Report: Crew left Alec Baldwin film set in protest before fatal shooting
Here's the line-up for tonight's episode of The Graham Norton Show
The JOE Music Quiz: Week 78
The JOE Friday Pub Quiz: Week 266
9 of the best horror movies on Netflix right now
QUIZ: Time to get down to business with this General Knowledge Quiz
HBO announces a new Sopranos series is in the works... kind of
You may also like
1 day ago
Dublin museum voted Europe’s leading visitor experience... again
3 days ago
6 deadly Dublin spots to get your cocktail and culture fix this autumn
6 days ago
Investigation launched after window smashed at Canada Goose store in Dublin
1 week ago
Emergency services rush to high-rise building on fire in Tallaght
1 week ago
Motorcyclist in his 20s dies following two-vehicle collision in Dublin
1 week ago
Two men arrested and firearm seized during search operation in Dublin
Next Page