The King's Speech has the world talking.

Eric Cantona has never been like other footballers, both on the pitch and off it.

He did some incredible stuff with the ball at his feet, and clearly has the brain of a creative type.

So when he stepped up to accept the UEFA President's Award on Thursday, we expected some big things from his speech.

And he did not disappoint.

Picking up the award, Cantona seemed grateful to receive it, for about a second...

He then made a bold prediction about the future of science and technology, while still making it sound beautiful somehow.

He said: "Soon science will not only be able to slow down ageing of cells, it will fix cells and so we will become eternal. Only accidents, crimes, wars will still kill us but unfortunately crimes and wars will multiply. I love football. Thank you." 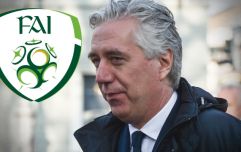 John Delaney resigns from the FAI

END_OF_DOCUMENT_TOKEN_TO_BE_REPLACED

Yep. That's what he said alright.

We're not quite sure what to make of the whole thing. All we know is that we absolutely love it.

We reckon that after that speech, it won't be long until it's called the Eric Cantona Award.