Have you ever walked out of the house with a fistful of cash, only to come home without a single bean? Well, we wouldn’t be surprised, as Ireland has been named as one of the most expensive places in Europe to have a night out.

According to the stats, Ireland has been named as the third most expensive country in Europe to have a night out on the town, with the average night costing us €112. 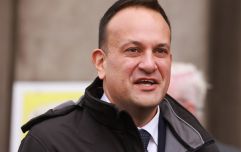 END_OF_DOCUMENT_TOKEN_TO_BE_REPLACED

We’ve come in just behind Denmark (€116.96) and Luxembourg (€130.90), which is bad news for any students heading off to those countries on Erasmus (like JOE’s former intern Alan Loughnane – HATE TO BE YOU AL!).

It's not all bad news JOE readers, however, as research shows that men actually NEED to have nights out with the lads.

The results of the European nights out survey, which was conducted by consumer network, One Big Switch, included the biggest cost factors for nights out, which were: babysitting (€50), dinner (€27), drinks (€21) and Taxi (€18.50).

As for the cheapest place to have a night out among the 28 EU members, Bulgaria came out on top, with the average night out costing just €24.24. Romania was the second cheapest country (€26.87), while the Czech Republic was the third cheapest (€29.49).

You can find out more results from the survey over here.