There's no need to panic.

Everyone in the US received an emergency alert from President Donald Trump on their phone on Wednesday afternoon.

Well, everyone was supposed to anyway. 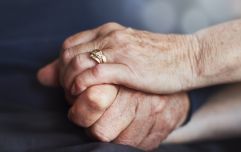 END_OF_DOCUMENT_TOKEN_TO_BE_REPLACED

It’s a test of a new alert system, the Integrated Public Alert and Warning System, that’s supposed to be used in specific circumstances to communicate with the public.

The alert attempted to send the message to every phone in the US operating on a network run by a carrier opting into the Wireless Emergency Alert system.

It is the first time a text service has been tested. TV and radio alerts have been tested before.

The content of the message made it clear that the message is only a drill. It read: "THIS IS A TEST of the National Wireless Emergency Alert System. No action is needed."

According to Federal Emergency Management Agency (FEMA): "The test will assess the operational readiness of the infrastructure for distribution of a national message and determine whether improvements are needed."

The system is the same one that’s used to warn the public about dangerous weather or missing children.

House of Rugby Ireland · Munster can't beat Leinster, Six Nations squad and John Cooney interview
popular
QUIZ: Can you name all of these countries just from one of their cities?
The 50 most iconic songs of all time* have been revealed
The JOE Movie Quiz: Week 86
Jared Leto says two things have kept him shredded for 20 years
Michael Jackson fans are convinced he's still alive after spotting him in daughter's selfie
Majority of English people 'pleased' or 'not bothered' by prospect of united Ireland
Police called to illegal rave to find pensioners queuing for vaccine
You may also like
4 days ago
People think The Simpsons predicted Kamala Harris becoming VP
4 days ago
Joe Biden begins presidency with 15 executive orders, some reversing Trump policies
5 days ago
Joe Exotic fails to receive pardon from US president Donald Trump
6 days ago
Joe Biden quotes James Joyce in farewell speech in Delaware
1 week ago
Armie Hammer drops out of Jennifer Lopez film amid social media controversy
1 week ago
Australia to kill US pigeon who survived 8,000-mile trip across Pacific
Next Page