France intends to ban single-use plastics on fruit and vegetables from January 2022 in the hopes of slowing down environmental collapse and addressing the catastrophic effect such materials.

30 fruits and vegetables will be subject to a change in their packaging following the new rules that come into effect on 1 January, reports the UK Independent.

END_OF_DOCUMENT_TOKEN_TO_BE_REPLACED

But it doesn’t stop there.

Over the coming years, more products will be blacklisted from plastic use, with the intention of putting berries and other delicate produce on the list by 2026.

By 2023, France intends to ban plastic packaging on even more products, including cherry tomatoes, green beans and peaches.

By the end of 2024, endives, asparagus, mushrooms, cherries and some salads and herbs will also be added to the zero-plastic list.

“We use an outrageous amount of single-use plastic in our daily lives. The circular economy law aims at cutting back the use of throwaway plastic and boost its substitution by other materials or reusable and recyclable packaging,” the French environment ministry said.

But the move has seen turbulence due to the short window of time between now and the start of January. The president of the French fruit sellers federation, Francois Roch, has said the move could be difficult in the required time frame. 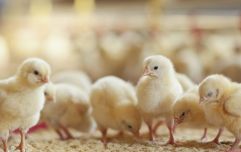 France to outlaw shredding and gassing of male chicks by 2022

END_OF_DOCUMENT_TOKEN_TO_BE_REPLACED

“Selling loose produce is complicated as many customers touch the fruit, and people do not want their fruit to be touched by other customers,” she added.

France moving towards more sustainable packaging options for fruit and vegetable is part of a larger scheme to address plastic and its wider environmental implications.

Though the likes of plastic straws, styrofoam takeaway boxes, cups and cutlery have been banned since 2020, France is hoping to take it one step further.

Alongside the fruit and veg rework, public spaces in the country must provide water fountains to reduce plastic water bottles. Magazines, newspapers and other paper products must also be shipped without plastic wrap and fast-food restaurants are also banned from offering free plastic toys.

The Big Reviewski || JOE · The Big Reviewski with Andy Serkis, Squid Game follow-ups & the return of Succession
popular
How to lower your cholesterol - 5 really handy tips
WATCH: Micheál Martin and Danny Healy-Rae had an almighty row in the Dáil
PICS: The man with the biggest penis in the world has one unbelievable problem with it
The cast of Succession on the most ridiculously expensive scene in the show
Nigel Farage has been saying republican phrases again, but in reality, he's the one laughing
The 50 most iconic songs of all time* have been revealed
The 100 greatest TV shows of the 21st century have been revealed
You may also like
10 months ago
“Hugely exciting” new ferry route from Rosslare to Dunkirk to begin in January
11 months ago
Paul Pogba releases powerful statement in response to 'fake news' from The Sun
1 year ago
Several Aer Lingus and Ryanair flights cancelled due to strike action in France
2 days ago
Significant increase in domestic abuse calls to Gardaí
2 days ago
Gardaí to target four major offences as part of clampdown on Irish roads
2 days ago
HSE chief Paul Reid: "Time to hit the reset button" as hospitals battle Covid surge
Next Page