French government: Firefighters may not be able to save Notre Dame

The interior minister's warning comes as a national emergency is declared.

Emmanuel Macron declared a national emergency and visited the site and the government's interior minister warned firefighters may be unable to save the 850-year-old building.

The blaze consumed the 12th century building on Monday evening, eviscerating the medieval wooden roof and spire. Officials have speculated the cause may be the €6 million renovation works, after the Catholic Church launched an urgent appeal.

Local media have reported that no one was injured by the fire and police are treating it as an accident.

French president Emmanuel Macron said he was "so sad tonight to see this part of all of us burn." He was scheduled to make a speech this evening following gilet jaunes protests but delayed arrangements in order to witness the scene.

A spokesperson at Paris' fire department said the next 90 minutes were "crucial" to containing the fire.

Notre Dame spokesman Andre Finot told French media: "Everything is burning, nothing will remain from the frame." 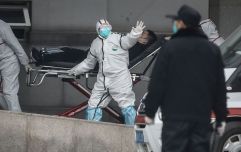 END_OF_DOCUMENT_TOKEN_TO_BE_REPLACED

France's interior minister cautioned firefighters may not be able to save the building. Efforts are being focused on rescuing priceless artworks from the back of the cathedral, as well as the North tower.

Officials have established a cordon around the cathedral. Mayor of Paris Anne Hidalgo said the fire was "terrible."

Notre Dame is one of the most-visited buildings in the world and annually 12 million people visit it.

The fire was first reported at 5.50pm British Summer Time.


popular
Disney+ has brought forward its launch date in Ireland and confirmed its price
QUIZ: How many of these characters from Breaking Bad can you name?
Four people dead as China confirms Wuhan coronavirus can be transmitted by humans
QUIZ: How many of these Recess characters can you name?
Gardaí warn of phone scam that could cost consumers a "small fortune"
QUIZ: Can you name all 14 landlocked counties in Ireland?
The JOE Movie Quiz: Week 37
You may also like
1 day ago
Ireland now has the fifth largest number of billionaires per capita
4 days ago
Study finds that cattle can talk to each other about how they feel
5 days ago
Ireland are looking for youngsters to represent us at Junior Eurovision
1 week ago
Six people dead after huge sinkhole in China swallows bus and pedestrians
1 week ago
Queen to hold crisis talks over Prince Harry and Meghan announcement
1 week ago
Iran admits it unintentionally shot down Ukranian airliner, killing 176 people
Next Page