Thousands of dollars have been raised in a matter of hours.

A fundraising campaign has been set up in support of David Gavin, a Mayo man who is currently missing after a swimming incident in Canada last weekend.

Gavin, 26, has been missing since going swimming with friends in Beaver Creek in British Columbia on Friday. 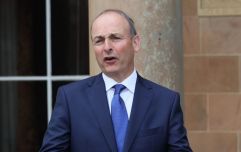 END_OF_DOCUMENT_TOKEN_TO_BE_REPLACED

A talented GAA player with Breaffy GAA Club in Mayo, David had recently moved to Canada with his girlfriend Ciara and was on his way with teammates to play for the Vancouver Irish Sporting & Social GAA Club (ISSC) in the Western Canadian Championship when the incident occurred.

A dive team from the Royal Canadian Mountain Police are currently conducting a search for David, whose family have arrived in Canada this week.

The Vancouver Irish Sporting & Social GAA Club (ISSC) have set up a GoFundMe page to support David's family and to raise funds to support the search and associated expenses in locating David and getting him home.

At the time of writing, $18,134 has been raised by 271 people in two hours; if you want to support the campaign you can do so here.

A special mass of support for David Gavin will take place at Breaffy GAA clubhouse on Wednesday 5 July at 9.30pm.