Once again, Greta Thunberg has spoken extremely powerfully about the subject of climate change.

Greta Thunberg has told the World Economic Forum in Davos that "pretty much nothing has been done" to tackle climate change, while speaking on Tuesday 21 January.

She said that despite there being clear evidence of a looming climate emergency, next to nothing had been done at a government level to reduce carbon emissions.

Thunberg said: "Planting trees is good of course, but it's nowhere near enough what is needed, and it cannot replace real mitigation and rewilding nature."

Addressing a number of political and business leaders, Thunberg asked: "I wonder, what will you tell your children was the reason to fail and leave them facing the climate chaos you knowingly brought upon them?"

She continued: "Pretty much nothing has been done since the global emissions of CO2 has not reduced. If you see it from that aspect, what has concretely been done, if you see it from a bigger perspective, basically nothing.

"It will require much more than this, this is just the very beginning." 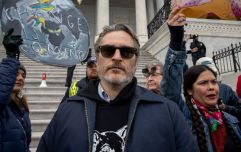 END_OF_DOCUMENT_TOKEN_TO_BE_REPLACED

Meanwhile, Donald Trump hit out at "prophets of doom" with regards to climate change, seemingly taking yet another jab at the 17-year-old.

Taoiseach Leo Varadkar, Tánaiste Simon Coveney and Minister for Finance Paschal Donohoe had been scheduled to represent the Irish government at the World Economic Forum in Davos but will be absent due to the upcoming General Election.


popular
QUIZ: How many of these Derry Girls characters can you name?
Brendan Gleeson's upcoming performance as Donald Trump is 'scary' and 'too close for comfort'
Sinn Féin announce a series of public rallies to take place in five counties
How well do you remember these classic PlayStation 2 games?
QUIZ: Can you name the Sega Mega Drive game from the screenshot?
Narcos star really wants to spend some time in Cork on his next visit to Ireland
5 new Netflix additions to spend your weekend watching
You may also like
5 days ago
World's richest man commits $10 billion to help fight climate change
1 month ago
David Attenborough says 'the moment of crisis has come' in relation to climate change
2 months ago
World's oceans losing oxygen at alarming rate, says study
3 months ago
"They have embarrassed this country on an international level." Teenagers criticise Government on climate change
3 months ago
Our guide to understanding and respecting the science behind climate change
3 months ago
Italy is the first country making climate change lessons compulsory
Next Page