You wouldn’t have put a dog out in the conditions that hit Thomond Park for Munster v Connacht last night, but the hail did make for one cracking image.

The hosts battled their way to a 22-16 victory over their Western neighbours in very, very wintry conditions last night, with JJ Hanrahan scoring all of Munster’s points as rain, wind and hail battered the famous Limerick stadium throughout.

Despite the weather, a sizeable crowd turned out to watch the provincial derby at Thomond Park, but while most of them had the roof of the stand to cover them, the players were not so lucky and at times they were subjected to weather that must have had the likes of James Downey and Ivan Dineen pining for the hot showers in the dressing room when it was at its worst. 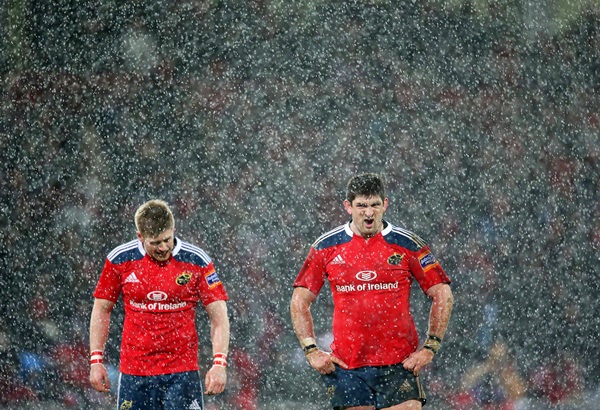 Rarely has it been so comforting to watch a game of rugby from the warmth of one’s own snug couch as it was last night.

popular
President Michael D. Higgins leads the Late Late line-up this week
Ryanair recruiting for over 100 positions at Dublin Airport
The spiritual successor to Roger Rabbit and 7 more movies and shows to watch this weekend
JOE Gaming Weekly - Ever wanted to see Batman fight Arya Stark?
Viewers left emotional following Derry Girls finale special
WATCH: George W. Bush accidentally calls Iraq invasion "unjustified" when discussing Ukraine
You may also like
1 week ago
Yesterday was the hottest day of the year (so far!) and there's more of where that came from
1 week ago
No, we're not getting a heatwave just yet, says Met Éireann
3 weeks ago
Met Éireann forecasts massive swing in temperature this week
3 weeks ago
Forecaster warns of "unusually" cold Irish weather change in next few weeks
1 month ago
Met Éireann forecasts snow as temperatures set to plummet
1 month ago
Wintry showers, freezing temperatures and possible snow en route this week
Next Page