Sometimes quitting your job can be the best decision for your health.

A lot of jobs come with stresses and pressures that are simply too much to bear if you want to live a happy life. A recent study has confirmed that workers who experience low levels of job satisfaction in their 20s and 30s are more likely to have an increased risk of mental health problems in their 40s.

The research, carried out by Ohio State University, found no increase or decrease in the risk of mental health problems for those who reported high or very high job satisfaction over the same period. 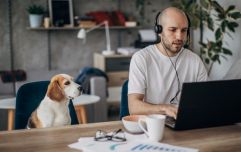 END_OF_DOCUMENT_TOKEN_TO_BE_REPLACED

Of the 6500 participants, those who reported job dissatisfaction in the first iteration of the study (which began in 1979) also reported worse general mental health, higher levels of depression and more difficulty sleeping.

An obvious caveat for a study like this is that people who do suffer from mental health problems might be less likely to experience job satisfaction in the first place - perhaps because they are already living with depression, or struggling to sleep.

The correlation between low job satisfaction and mental health issues may not be a causal one, but the evidence shows that the two are certainly in some way connected - with those who dislike their job 46% more likely to be diagnosed with "emotional problems", according to Live Science.

The Big Reviewski || JOE · The Big Reviewski with Dune, a mini-Hangover reunion & the best of Timothée Chalamet
popular
WhatsApp to stop working on 53 phone models, including iPhone 6
A recent Oscar Best Picture nominee is among the movies on TV tonight
Waterford driver fined for speeding, immediately speeds away, is fined again
Urgent appeal launched for blood donations as supplies "extremely low"
Three Status Yellow warnings issued as rain set to hammer the country
FREE NOW reports "200 requests a minute" on Sunday following nightclubs reopening
Paschal Donohoe confronted on the street by anti-vaccine protestors
You may also like
1 week ago
Kodaline's Steve Garrigan: "Music has always been that safe place"
2 weeks ago
Alan Quinlan: Young people on social media are "suffering in silence... it's very, very dangerous"
4 months ago
"You don't have to man up... be vulnerable." Keith Walsh on the need to change attitudes to men's mental health
4 months ago
Male eating disorders: Breaking the stigma
5 months ago
Cannabis is the "gravest threat" to the mental health of young people, College of Psychiatrists Ireland says
6 months ago
There’s help at hand if you’re feeling overwhelmed by everything at the moment
Next Page